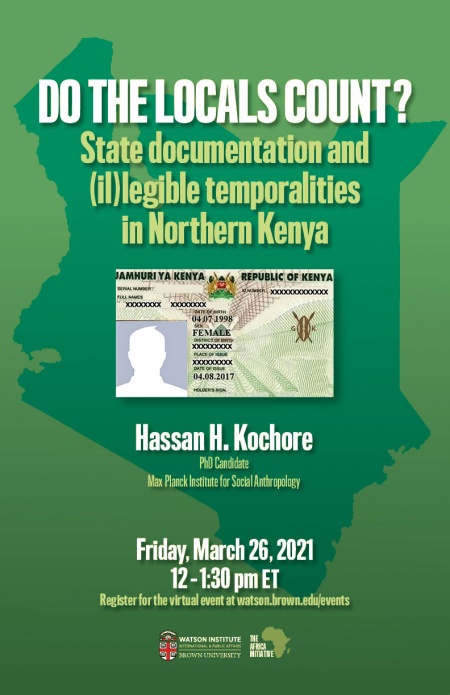 During my recent PhD fieldwork researching aging in northern Kenya, older residents often asked whether I was interested in their ‘government age’ or ‘gaan d’alota’, one’s biological age. The government age is the date of birth captured on the government-issued kipande, identity card while gaan d’alota is (re-) counted through a local age system. There are often glaring numerical discrepancies between the two different ages individuals invoke. This paper draws on an (il) legibility ontology to unpack the complex ways these temporal systems intersect and compete. In particular, the talk locates this clash at the center of the Kenyan state’s byzantine and problematic history of colonial, postcolonial and contemporary registration and control regimes.

Hassan Kochore is a PhD candidate at Max Planck Institute for Social Anthropology. He holds a Bachelor's Degree in Anthropology from the University of Nairobi & MSc in African Studies from Oxford University. His research experience includes conducting ethnographic fieldwork, archival, literature and media-based research. He has published several peer-reviewed journal articles and chapters in edited volumes making contributions to a range of topics: Elections, Ethnicity & The State, The Politics of Large-Scale Infrastructure Projects and Statecraft on the Periphery with a regional focus on northern Kenya.