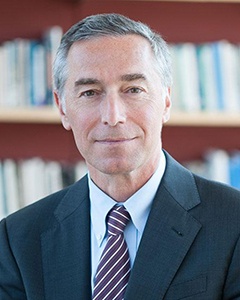 Richard M. Locke is the Howard R. Swearer Director of the Watson Institute for International Studies and a professor of political science and public and international affairs.

Locke's current research is focused on improving labor and environmental conditions in global supply chains. Working with leading firms like Nike, Coca Cola, Apple, and HP, Locke and his students have been showing how corporate profitability and sustainable business practices can be reconciled. Locke has published five books – most recently The Promise & Limits of Private Power, Cambridge University Press (2013), based on his research on labor standards in global supply chains; Production in the Innovation Economy, with Rachel Wellhausen, The MIT Press (2013); Working in America with Paul Osterman, Thomas Kochan, and Michael Piore, The MIT Press (2001); Employment Relations in a Changing World Economy with Thomas Kochan, Michael Piore, The MIT Press (1995); and Remaking the Italian Economy, Cornell University Press (1995), as well as numerous articles on economic development, labor relations, and corporate responsibility.

At Brown, Locke teaches graduate and undergraduate courses on the political economy of labor and development as well as on global entrepreneurship. Locke was named a 2005 Faculty Pioneer in Academic Leadership by The Aspen Institute and awarded the MIT Class of 1960 Teaching Innovation Award in 2007 and the Jamieson Prize for Excellence in Teaching in June 2008. He currently chairs the Apple Academic Advisory Board, a group of independent academics who are working with Apple to improve labor conditions among the company's suppliers.