Samar Yazbek -- A Woman in the Crossfire: Diaries of the Syrian Revolution 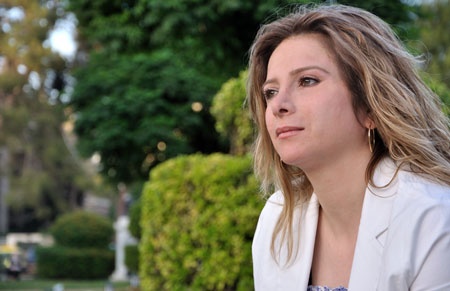 Samar Yazbek is a Syrian writer, novelist and journalist, author of A Woman in the Crossfire: Diaries of the Syrian Revolution.

Samar Yazbek was an active and outspoken critic of the regime long before the outbreak of violence. Her prominence as a high-profile Alawite journalist and author made her criticism all the more searing. She was denounced by her family and clan, and harassed by the security services. As the brutality mounted, she was forced to flee Syria with her young daughter.

In her diaries, Samar Yazbek describes the uprising that started in Dar’a in March 2011, and the brutal response that followed. Her own observations are interspersed with the stories of those at the forefront of the revolution, whose accounts she has dedicated herself to collecting. These testimonies provide a wholly unique insight into the conflict, unlike anything else yet to emerge from the chaos and tragedy that enshroud Syria. Yazbek delivers it all in the beautifully rendered language of a novelist desperately seeking to understand the suffering of her country.

Samar Yazbek was born in Jableh in 1970. She studied literature before beginning her career as a journalist and a scriptwriter for Syrian television and film. A highly regarded writer in Syria, her novels in Arabic, include Child of Heaven (2002), Clay (2005), Cinnamon (2008) and In Her Mirrors (2010). Cinnamon will be published in an English translation by Arabia Books, an imprint of Haus Publishing, in November 2012.

The Middle East Studies program is hosting her on Sept. 20, 2012, together with Bronw's International Writers Project. She will speak about her book and take questions.

A New York Times opinion piece, "In the Shadow of Assad’s Bombs," can be found here: http://www.nytimes.com/2012/08/10/opinion/in-the-shadow-of-assads-bombs.html?pagewanted=allit.