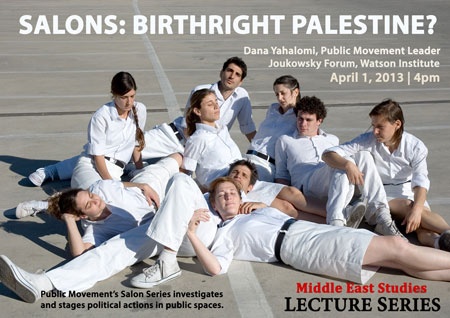 In her lecture, Dana Yahalomi, Public Movement Leader, will present key strategies developed by the movement alongside examples of previous actions. Over the last six years, Public Movement has explored the regulations, forces, agents, and policies, formations of identity and systems of ritual which govern the dynamics of public life and public space. The lecture will conclude and open into discussion with the recent action SALONS: Birthright Palestine? (February – April 2012, New Museum, NYC; co-presented with Artis) which used the phenomenon of Birthright Israel trips to raise questions about nationality and heritage, as well as about the politics of tourism and branding. In a series of performative public discussions, each adopting existing formats of discursive forums, different publics presented and debated upon related questions and issues that would inform, affirm and/or oppose the proposal to initiate a Birthright Palestine program.

Public Movement is a performative research body that investigates and stages political actions in public spaces. Public Movement studies and creates public choreographies, forms of social order, and overt and covert rituals. Their actions include synchronized procedures of movement, new folk dances, spectacles, marches, and inventing and reenacting moments in the lives of individuals, communities, social institutions, peoples, states, and of humanity.