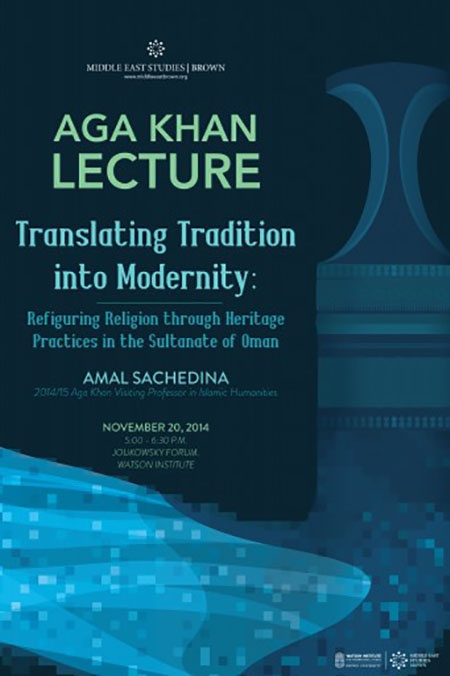 “Translating Tradition into Modernity: Refiguring Religion through Heritage Practices in the Sultanate of Oman"

Amal Sachedina’s work contributes to debates about the modernist notion of time and its relationship to global historical conservation practice and draws attention to the modern state and its role in shaping new modes of relationships between religion and politics.

A recording of the event is available here.

Since its inception as a nation state from 1970, Oman’s expanding heritage industry and market for crafts and sites — exemplified by the boom in museums, exhibitions, cultural festivals and the restoration of more than a hundred forts, castles and citadels — fashions a distinctly national geography and a territorial imaginary. Material forms - ranging from old mosques and shari’a manuscript to restored forts and national symbols such as the coffee pot or the dagger (khanjar)  - saturate the landscape and become increasingly ubiquitous as part of a public and visual memorialization of the past.   But the construction of the heritage project in modern Oman has also necessitated the reconfiguration of the public domains of history and Islam as seemingly separate and autonomous, erasing any awareness of the socio-political and ethical relationships that once characterized Ibadi Islamic rule (1913-1958) in the region. The result is the transformation of what was once a  shari’a  society through practices of progressive historicity.  Material forms, and their circulation through modern institutional techniques of education and mass publicity assume a repetitive aesthetic pedagogy that cultivate every-day civic virtues, new modes of religiosity and forms of marking time, defining the ethical actions necessary to becoming an Omani modern through the framework of tradition. Moving beyond merely rendering the past “amenable” to the demands of modernity,   heritage in Oman as an iterable mode of representation, generates a conception of history that, when “properly” conceived and practiced, leads to a distinctive Omani modernity. However, even as the modern Omani state diagrams an orientation towards the past through the making of a heritage landscape, it transforms the discourse and practice of Ibadi Islam itself, by re-configuring its socio-political and ethical fabric of communal relationships, rendering them more amenable to modern state-building efforts.

Amal Sachedina completed her graduate work in socio-cultural anthropology and Middle East studies at the University of California, Berkeley.  Her research, now a book project, explores the material practices of making and reflecting on the past through examining the changing functions and roles of material objects and landscapes over the course of the 20th century at a time when the last Ibadi Imamate (1913-1959) pervaded the interior of what is now the Sultanate of Oman.  It is a study of how forms of history, the re-configuration of time and the institutionalization of material heritage recalibrate the Islamic tradition to requirements of modern political and moral order as part of nation building in the Sultanate of Oman.  This becomes a means towards approaching heritage in ways that shift away from its ability to instill ideologies to one that shapes the perceptual habits and ethical sensibilities of its audience.  Sachedina’s work contributes to debates about the modernist notion of time and its relationship to global historical conservation practice and draws attention to the modern state and its role in shaping new modes of relationships between religion and politics. She has recently been a Mellon fellow at the American Museum of Natural History where she conducted research on the Asian collections as part of the process of constructing exhibit narratives on Islam and Middle East as part of the pre-planning phase towards renovating the Asia Wing at the American Museum of Natural History, NY. In fostering an inter-disciplinary approach to the study of material culture, Amal Sachedina earned a B.A. in archaeology from the University of Michigan and an M.Phil in Islamic Art and Archaeology from Oxford University and has been a research consultant for World Heritage advisory bodies such as ICOMOS (International Council for Monuments and Sites) and ICCROM (International Centre for the Study of the Preservation and Restoration of Cultural Property).