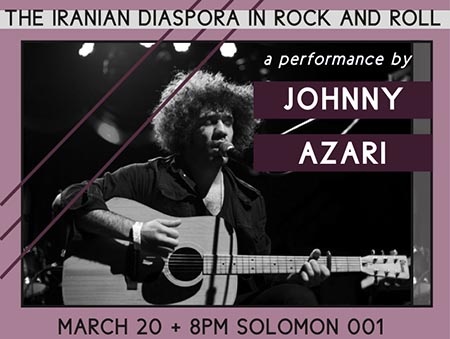 Time and location TBA. Co-sponsored by the Persian Club and the Student Activities Office

Persian Club invites you to celebrate Nowrooz, the Iranian New Year on March 21, with a performance by Iranian American artist Johnny Azari. The United States is now home to a large population of Iranian immigrants from before and after the 1979 revolution. Both recently naturalized and lifelong Iranian Americans have been producing politically relevant art for decades and this trend only increased after the 2009 Green Movement. Johnny Azari was born in Iran but spent most of his life outside of the country. His art focuses on revolution and radical movements within and outside of the United States.
Join the event on Facebook »