CANCELLED - An Ethnography of Presence: Palestinian Narratives of Place and Belonging 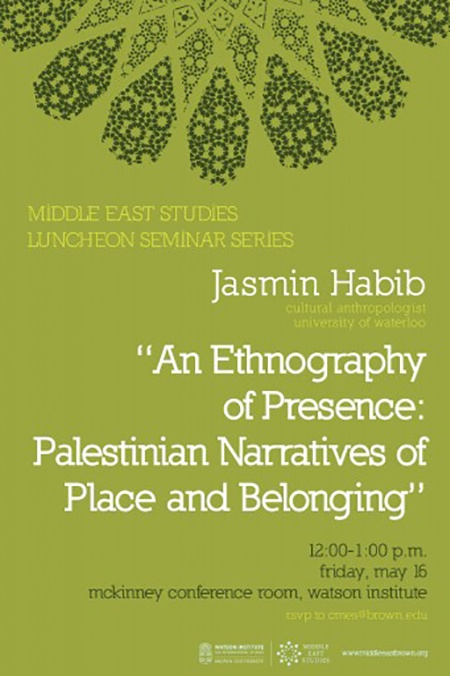 Speaker:  Jasmin Habib, Cultural Anthropologist from the University of Waterloo

Ethnographic analyses of the loss of Palestine usually focus on economic and political aspects, paying less attention to the emotional and cultural pain of that loss. In this respect, these analyses tend to anaesthetize the effects of colonial, militarized, and racialising processes. Although they have been unable to reclaim their lands by military force or political means, Palestinians continue to resist military occupation and the confiscation of their lands; and to defend their right to return. They have also been moved to write and to recite poetic expressions of their experiences, sharing the depth of their losses among themselves and others. Such poems write the life of Palestine into the memory and history of a world that has sought to make their experiences invisible. I trace such narrations of place and belonging in what I am calling an “ethnography of presence.”

Jasmin Habib  is a cultural anthropologist who teaches in Political Science as well as the Balsillie School for International Affairs at the University of Waterloo.  Among her publications is her book, Israel, Diaspora and the Routes of National Belonging. She is completing Transnational Palestine: History, Memory, Community, Activism.