Elias Khoury: Commitment and Beyond in Modern Arabic Literature 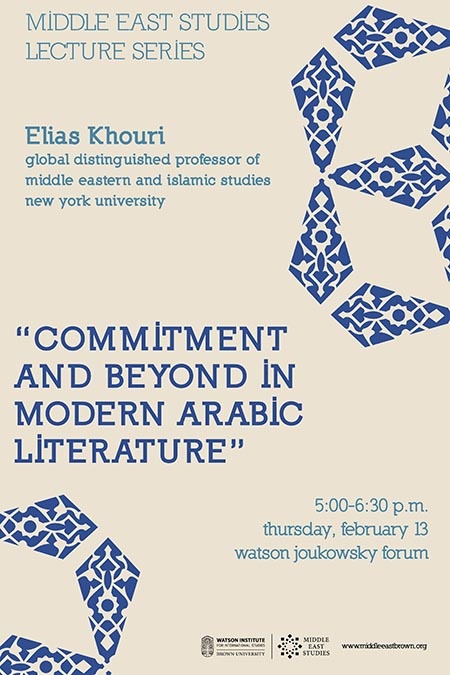 The Lebanese writer Elias Khoury was born in Beirut in 1948 and studied Sociology and History at Lebanese University in Beirut and the University of Paris. He began his career as a literary critic with his book, Searching for a Horizon: The Arabic Novel After the Defeat of 1967 (1974). Professor Khoury then published his first novel, On the Relations of the Circle, (1975), and became part of the Beirut vanguard in modern Arabic literature, which was seeking to create new dimensions in the movement of modernism which began in the late forties with a revolution in poetry. He served on the editorial board of Mawakif Quarterly, and as the managing editor of Shu’un Falastinia (Palestine Affairs) and of Al Karmel Quarterly.

Professor Khoury has published 12 novels which have been translated into numerous languages, four books of literary criticism, and many articles and reviews. He is also known as a playwright, and his three plays have been performed in Beirut, Paris, Berlin, Vienna, and Basel. Professor Khoury has participated in writing two films, and he worked as a journalist, serving as Director and Editor-In-Chief of Mulhak, the weekly literary supplement of the An-Nahar Daily in Beirut.

Professor Khoury is a public intellectual who plays a major role in the Arabic cultural scene and in the defense of the liberty of expression and democracy, and he is a cultural activist who directed the theatre of Beirut and co-directed the Ayloul Festival of Modern Arts in Beirut. His academic career includes his work as a Professor at Columbia University, the Lebanese University, the American University of Beirut, and the Lebanese American University.