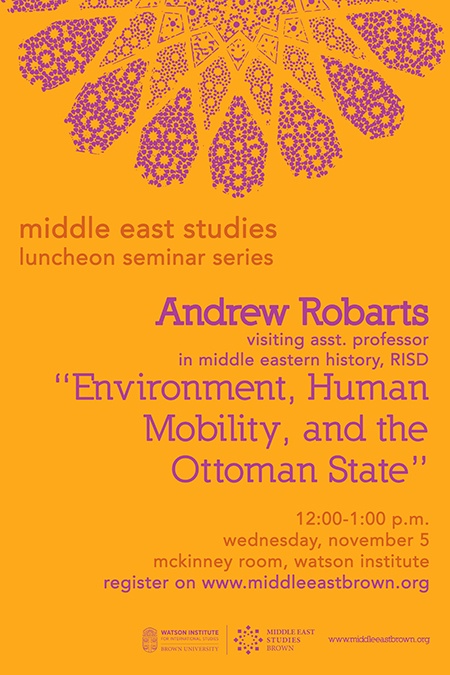 In the last few years, major turning points in Ottoman history have been re-considered and re-examined from an environmental perspective.   Analyzing the impact of environmental and climatic factors on the economic and political trajectory of the Ottoman Empire, scholars have explored the extent to which “imperial ecology” (resource extraction, provisioning systems, disease vectors, and human mobility and settlement) drove imperial-level politics and decision-making. Branching out from this “environmental turn” in Ottoman and Middle Eastern historiography, spatial analysis is emerging as a cutting edge development in Ottoman and Middle Eastern scholarship. Approaching the Ottoman Empire as a multi-faceted imperial entity consisting of multiple centers and multiple peripheries, spatial history continues the historiographical process of breaking down political and cultural boundary lines within Ottoman imperial space. By moving beyond the vertical or center-periphery dynamic in its analysis of state-society relations, spatial history challenges the traditional hub and spoke approach to Ottoman history.   Spatial analysis is also, like its environmental ancestor, generally unconcerned with classical historical-chronological delineations (i.e. early-modern or modern).

Moving into the space opened up by scholars of Middle Eastern and Ottoman history such as Alan Mikhail, Sam White, and ReÅŸat Kesaba, Andrew Robarts’ current research project explores how subject populations on the move within the Ottoman Empire conceptualized the contours of imperial space. Nationalist historiography, the area-studies canon of US universities, and international political regimes have carved up Ottoman imperial space. In an attempt to put the Sultanic humpty-dumpty back together again his research explores the internal and sub-imperial mercantile and social networks that connected disparate parts of the Ottoman Empire. At this analytical level, lateral and/or horizontal commercial, cultural, and provincial connections are emphasized.

Drawing upon research conducted in Ottoman and Bulgarian archives, Robarts develops a prosopographical study of Bulgarian “movers” (merchants, migrants, pilgrims, and refugees) in the Ottoman Empire in the late eighteenth and early nineteenth centuries. He asks the broad question of how identities (imperial, national, cultural) react to and are annealed by displacement and mobility. Specifically, he is interested in how Bulgarian merchants and migrants who travelled to, engaged in trade with, and settled (voluntary or otherwise) in the Ottoman Empire’s Middle Eastern provinces identified themselves and were identified by others.

Although his research demonstrates the value of a social-environmental approach to historical inquiry and argues that high politics and transformations in state-society relations can be illuminated through an analysis of human encounters with nature and space, he does not completely dismiss the role of the state. Rather his research combines environmental, spatial, and political analysis to explore the nexus between state sovereignty, environmentally-induced population movements, and human mobility in (what is classically defined as) the transitional  moment from the early-modern to modern periods.

Andrew Robarts is a Visiting Assistant Professor in Middle Eastern History at the Rhode Island School of Design (RISD).   He has previously taught Middle Eastern and Ottoman history at the University of California, Riverside (UCR) and Central Connecticut State University (CCSU). His research specialization is the comparative history of the Ottoman and Russian Empires with a particular focus on disease, public health, quarantines, and anti-disease legislation. He is currently developing a project on environment, space, and human mobility in the early-modern Ottoman Empire. His research languages include Ottoman Turkish, Modern Turkish, Bulgarian, Russian, French, and German. Born and raised in the Middle East (Beirut, Lebanon and Cairo, Egypt) Robarts has a Ph.D. in History from Georgetown University, a Master of Science degree in Foreign Service from Georgetown University, and a B.A. in History from Bowdoin College. Between his Master’s and Ph.D., Robarts worked for seven years in the refugee and humanitarian relief field for the International Rescue Committee and the United Nations High Commissioner for Refugees. His publications include: “Quarantine Construction, Anti-disease Legislation, and the Re-centralization of the pre-Tanzimat Ottoman State” in Plague and Contagion in the Islamic Mediterranean (London: Ashgate) (Forthcoming in Fall 2014); “Imperial Confrontation or Regional Cooperation?: Bulgarian Migration and Ottoman-Russian Relations in the Black Sea Region, 1768-1830s”, Turkish Historical Review (Vol. 3, Summer 2012); Black Sea Regionalism: A Case Study (The American Historical Association) (Forthcoming in Fall 2014); and “From Muscovy to Magnitogorsk: An Historical Overview of Migration in Russia” in Labor Migration in Eurasia: Links to Global Migration and Human Security Trends (ed. Cynthia Buckley) (Armonk, New York: M.E. Sharpe Press) (Forthcoming in 2015)