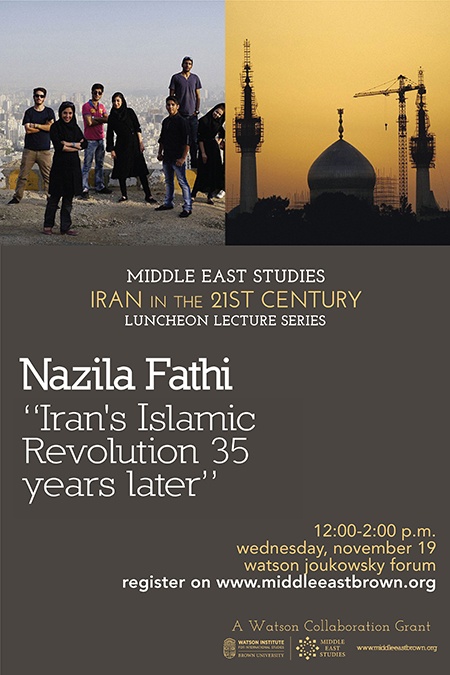 The seminar was by a signing of Nazila Fathi's forthcoming book The Lonely War: One Woman's Account for the Struggle for Modern Iran.

A recording of Nazila Fathi's lecture can be accessed here.

This event is part of the Iran in the 21st Century Luncheon Lecture Series. The series is made possible through funding by a Watson Institute Collaborative Grant.

Iran has gone under profound change since its 1979 revolution. Even though the founders of the new regime had vowed to establish an Islamic state, the regime shed its ideological skin over the years, and there is only a skeleton left of those earlier fundamentalist ideas. On the contrary, the regime's policies have empowered traditional women, raised education levels and increased the population's longing for civil liberties.

Nazila Fathi is a journalist, translator, and commentator on Iran, as well as the author of The  Lonely War: One Woman’s

Account of the Struggle for Modern Iran (available on December 9, 2014). She reported out of Iran for nearly two decades until 2009 when she was forced to leave the country because of government threats against her. She was based in Tehran from 2001 for the New York Times, penning over 2,000 articles for them. Prior to that, she wrote for Time magazine, Agence France-Presse and the Times. She translated the book History and Documentation of Human Rights in Iran by Nobel Peace Prize Laureate Shirin Ebadi into English in 2001. She has also written for the New York Review of Books, Foreign Policy, and the Harvard Nieman Report and has been a guest speaker on CNN, BBC, CBC and NPR. Fathi  received her MA in Political Science from the University of Toronto. She was awarded Raoul Wallenberg Fellowship at Lund University in 2003, Nieman Fellowship for journalism at Harvard in 2010-11, Shorenstein Fellowship at the Harvard Kennedy School in 2012, and a fellowship at Harvard Belfer Center in 2012-13.

Vogue Magazine coverage of Nazila Fathi's work as a New York Times correspondent, life in exile, and her upcoming book.