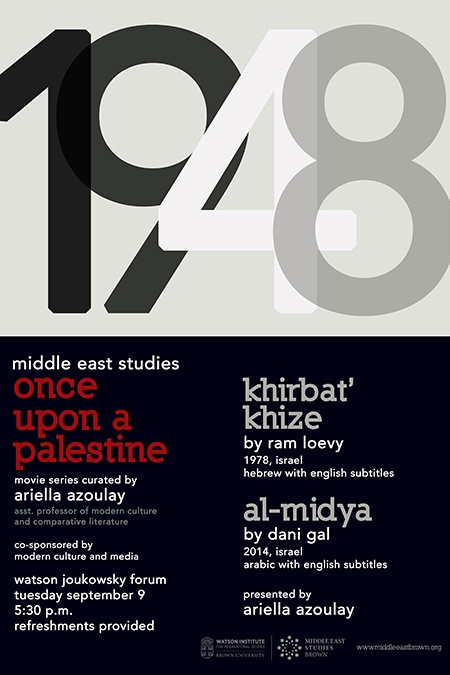 Khirbat Khize is a TV drama directed by Ram Loevy in 1978 based on a novel (bearing the same title) by S. Yizhar, published in 1949. The novel is a step-by-step depiction of the expulsion of Palestinians by Israeli soldiers. One of the soldiers repeatedly questions their deeds. The moral voice recurds and so its rejection by the others, in ritual-like form. This ceremonial repetition, which the movie makes more explicit, can be read a a rite of passage through which Jews in Palestine became the masters of the land. Since the 1960s, the novel was included in high school curricula. In 1978, when the film was to be broadcast, the Minister of Education and Culture banned it and the workers of the Israeli TV turned spectators' screens dark for 50 minutes, the duration of the movie.

al-Midya was chosen as the location for shooting the film Khirbat Khize in the mid-1970s. The villagers did not see the movie until Dani Gal, the director of this film, went to the village and screened it. The film documents the encounter of al-Midya's residents with the movie, but no less so, the way they experienced in the late 70s the arrival of a troop of actors dressed as soldiers to shoot a movie that revives the expulsion of 1948. In the absence of subtitles in Arabic (in Khirbat Khize) one of the local residents serves as a simultaneous interpreter. The Israeli soldiers' words dehumanizing the Palestinians, repeated in Arabic by a Palestinian, produce remarkable moments of estrangement.

This event is part of "1948 - Once Upon a Palestine", a film series curated by Ariella Azoulay, Assistant Professor of Comparative Literature and Modern Culture.