On Late Ottoman History Writing: Is there a new kind? 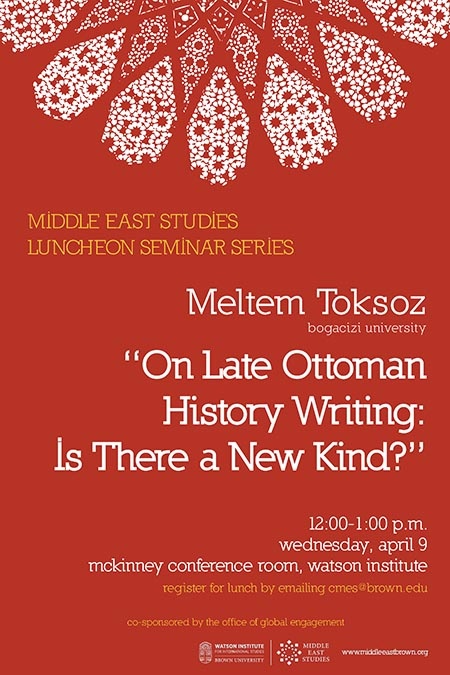 The Choices Program conducted an interview with Meltem Toksöz on Late Ottoman and early Republican history of Turkey. Click here to watch the interview.

Ottoman “narrative sources” such as chronicles and historiography -- not to mention biographies, fiction, diaries, political essays and so forth had been neglected for a long time (perhaps with the exception of fifteenth-century sources) in favor of archival ones, first cadastres, under the influence of the “Annales” school and the works of Ã–. L. Barkan, then judicial archives as well as other document series. When used, Ottoman historical writing of any age, have served as primary source. However, during the last twenty years, grosso modo, there has been a turn of attention towards Ottoman narrative sources. In the same period, a tremendous production of transcriptions and scholarly editions has appeared, especially in Turkey.

In addition, the existing scholarship has already established a powerful motif of transformation in late Ottoman history writing toward the standards of objective and documented historicism. IN other words,late Ottoman historiography has been discussed as a refashioning along European lines within the context of the Tanzimat era. Similarly, this late Ottoman historicism has been viewed as the result of mere translation, which in turn pointed to an understanding of Ottoman modernization only as a linear development of positivistic Westernization, without any input of its own.

In my research, I attempt to contextualize history writings in the late empire as narratives in their own right and analyze the ways in which they defined the study of the past. Here I will pay particular attention to the world of universal history texts as part of an analysis of the much complicated intellectual, historiographical and educational legacy of the last era of the Ottoman Empire in a combined framework. Indeed, historical works produced outside chronicle writing allow us to study a variety of practices and forms of historical knowledge, particularly after the opening of higher education institutions in the Ottoman Empire. Indeed the late Empire signified the prevalence of such texts for the curricula in the specialized schools such as. One of these histoires universelles, that of Mehmed Murad written in the 1870s in 6 volumes (Tarih-i Umumi) was used as a textbook in the Mekteb-i MÃ¼lkiye, while those penned by Ahmed Midhat were first published as newspaper series. I believe such universal histories embody what I will -for now- call a new genre that simultaneously embody Ottomanism, historicism and public education; signaling perhaps, a multiplicity of Ottoman historical/intellectual/academic genres.

Cosponsored with the Office of Global Engagement.