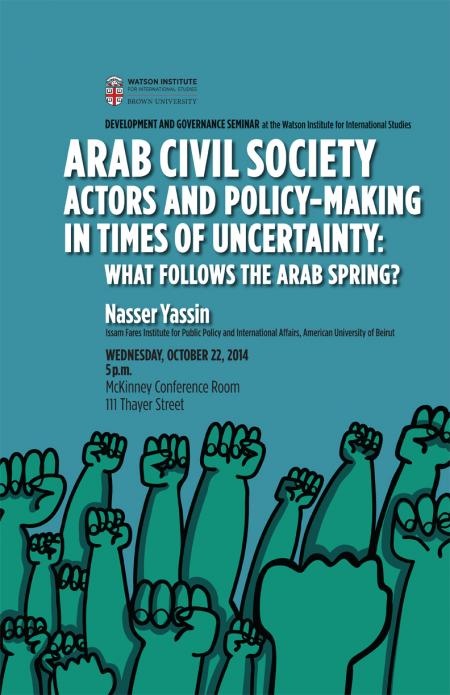 For many years, people in most Arab states were barred from democratic practices. Elections were symbolic and largely rigged and unfair. Participation in public domain was limited to those within the spheres of the ruling parties and their chieftains. State elites monopolized policy making for decades and limited participation to very few actors. Until the popular uprisings, dubbed the Arab Spring, civil society actors were subject to severe control and repression. With the toppling of authoritarian regimes, we see a nascent civil society (CS) (re)emerging. The dynamics of the budding CS movement and especially its role in policy making, however, has not yet been examined. The on-going changes and unfolding of events make observing and analyzing the role of CS actors in the new polity unique. This talk examines the prospects for Arab civil society actors to position and re-position themselves in the post Uprisings policymaking landscape. It reflects on the current transition in the body politic through a review of historical events that shaped state and society relations in the Arab world. It concludes that the future polity will depend on all actors and not only CSOs, to which the transitional period offers a platform to (re)negotiate their role of influence.

Dr. Nasser Yassin is the Director of Research at the Issam Fares Institute for Public Policy and International Affairs at the American University of Beirut (AUB), Lebanon; and an assistant professor of policy and planning at the Department of Health Management and Policy at the Faculty of Health Sciences at AUB. He holds a PhD in Development Planning from University College London, an MSc in Development Studies from the London School of Economics, and an MSc and BSc from the American University of Beirut. His research and practice interests are within the area of public policy making and governance in countries and societies in transition, with emphasis on making as well as implementation of social and health policies, poverty alleviation and youth policies. His current research is looking at how various stakeholders, non-sate actors and community groups, including those usually excluded from the policy landscape, can play a role and can influence the making and implementation of social and health policies. Nasser has advised a number of international organizations such as the UNDP, UN-HABITAT, UNFPA and ILO as well as governmental and non-governmental organizations on subjects related to social and human development, post-conflict rehabilitation, and community development.

Part of the Watson Institute's  Development and Governance Seminar Series.