From Providence to Tehran: Using Music and Performance for Social Change | A Panel Discussion with Mohsen Namjoo and Brown Faculty 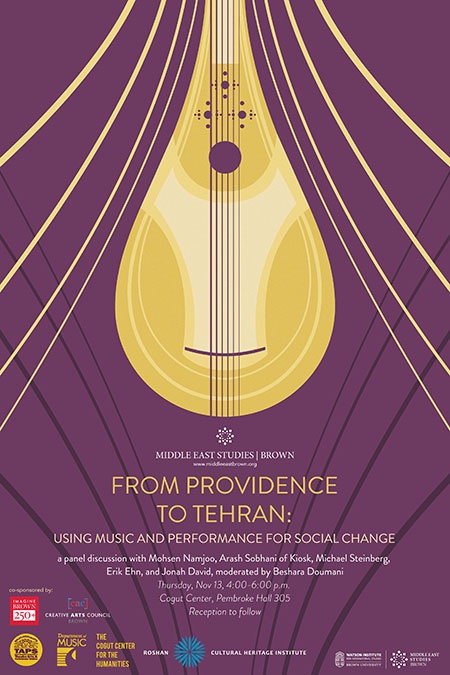 Anchoring the intellectual and humanities programming for the Iranian Studies Initiative in Fall 2014 will be a panel entitled "From Providence to Tehran," which will explore the intersections of music, performance, and ideas in service of nascent social movements.

Made possible by funding through Brown University's 250th Anniversary, Creative Arts Council (CAC,)  Cogut Center for the Humanities, the Department of Theatre Arts and Performance Studies (TAPS,) the Department of  Music, and  Roshan Cultural Heritage Institute.

The panel will be followed on Saturday, Nov. 15th, by an Iranian Music Festival — Underground Iran -  which will feature Namjoo's band and leading Iranian group, Kiosk, at RISD auditorium on stage together for the first time. Each group–both of whom are banned from playing in their home country– brings a different performative aspect to their message.

In an age of new uprisings and revolutions, there is an important need for the interdisciplinary study of the intersections of music, performance, and ideas in service of nascent social movements. This is particularly true in modern Iran, a country of rich artistic tradition where revolution has taken on a complex, varied meaning in the generations since 1979. As a focal point to these larger interdisciplinary questions, and to enhance the cultural aspects of Brown’s Iranian Studies initiative, Middle East Studies has engaged the acclaimed Iranian artist, songwriter, singer, music scholar and setar player Mohsen Namjoo for a one-year residency in 2014 as a visiting professor of Iranian Studies.

Namjoo  is an Iranian artist, songwriter, singer, music scholar and setar (traditional Persian lute) player based in Brooklyn, New York. As a focal point to these larger interdisciplinary questions, and to enhance the cultural aspects of Brown’s Iranian Studies initiative, Middle East Studies has engaged Namjoo for a one-year residency in 2014 as a visiting professor of Iranian Studies.

Hailed as “the Bob Dylan of Iran” by the  New York Times, Mohsen Namjoo is a visionary artist personifying these traits. Namjoo’s revolutionary work is his synthesis of a virtuoso musical ability with a dramatic performance that is at once sublime, satirical, humorous, poignant, and biting. In the course of performing a single song, Namjoo might inhabit several characters; in this way a single performance questions and provokes the listener through modern everyday voices that are anchored by classical instrumentation.

Sobhani is an Iranian musician and  television host. He is the lead singer and guitarist of underground rock band  Kiosk  and the host of  OnTen, a  satirical news program that airs on  VOA Persian.

Sobhani was born and raised in Tehran, and attended  Isfahan University of Art  from where he earned a MA in Architecture. He moved to the United States in 2005 to release the Kiosk's first album, Ordinary Man. Since then, Sobhani released 7 albums with Kiosk.

He will talk about the "underground music of Iran" it's inception what it means to the younger generation, it's significance and where it stands socially and politically.

Jonah David graduated Brown University in 2014 with degrees in Sociology and Music. For the past four years, he has been facilitating creative arts workshops in the Rhode Island prison. He recently produced album of music, with lyrics written by participants in a songwriting workshop at the prison, and performed by local musicians. His thesis in Sociology was on the impact of music on participants in these workshops. He currently lives in Providence, working as a videographer at a charter school and a few local non-profits.

For the past four years, David has facilitated creative arts workshops in the Rhode Island prison as part of Space in Prison for the Arts and Creative Expression. In the summer of 2012, he facilitated a weekly songwriting workshop and then recorded an album with local musicians performing the songs written at the prison. For his senior thesis in Sociology, David interviewed the participants in the workshop (one of whom has since been released) and wrote about how writing music impacted their identity, sense of meaning and self-worth, and connection with others. He writes, “Music seems to be an incredibly powerful tool for inner change in the context of an otherwise quite stifling environment.”

Michael P. Steinberg is Director of the Cogut Center for the Humanities and Professor of History and Music at Brown University. He also serves as Associate Editor of The Musical Quarterly and The Opera Quarterly.  He is the author of studies of Hermann Broch, Aby Warburg, Walter Benjamin, and Charlotte Salomon, and of Austria as Theater and Ideology: The Meaning of the Salzburg Festival (Cornell University Press, 2000), of which the German edition won Austria's Victor Adler Staatspreis in 2001. Listening to Reason: Culture, Subjectivity, and 19th- Century Music appeared Princeton University Press in early 2004; Judaism Musical and Unmusical was published by the University of Chicago Press in 2007. He serves as a director of the Barenboim-Said Foundation (U.S.A.) and, between 2010 and 2013, as dramaturg to the new production of Wagner's Ring of the Nibelung at the Teatro alla Scala, Milan, and the Berlin State Opera.

Steinberg will say something about musical and cultural citizenship, with examples drawn from the Opera School of the University of Cape Town and the Polyphony Music Education program in Nazareth.

Work includes  The Saint Plays,  No Time Like the Present,  Wolf at the Door,  Tailings,  Beginner,  The Cycle Plays  (for Theatre of Yugen) and  Ideas of Good and Evil. The  Soulographie  project is a series of 17 plays on the history of the US in the 20th  Century from the point of view of its genocides; scripts include  Maria Kizito, Heavenly Shades of Night are Falling, Yermedea, Drunk Still Drinking. Artistic Director, Tenderloin Opera Company (Providence RI — generating new works of music-theater by, for and about people who are homeless/homeless advocates). Artistic Associate, Theatre of Yugen (SF). Graduate of New Dramatists. Current Chair, and Director of Writing for Performance, Brown University.

Ehn will discuss how performance can create a space that promotes full presence and attention, while eschewing description - in fact, performance is elementally indefinable. therefore - apt to promote change into who knows what, and to respond to that which surpasses articulation (disaster, bliss).