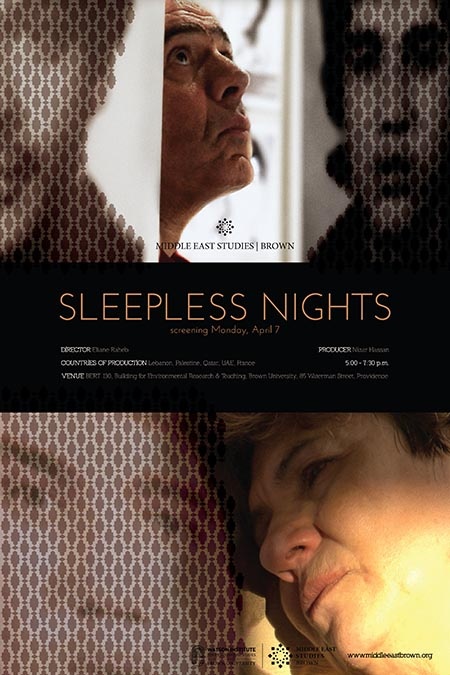 Through the stories of Assaad Shaftari, a former high ranking intelligence officer in a Christian right wing militia, responsible for many casualties in the protracted civil war in Lebanon and Maryam Saiidi, the mother of Maher, a missing young communist fighter who disappeared in 1982, the film digs in the war wounds and asks if redemption and forgiveness are possible.

Eliane Raheb was born in Lebanon and is the director of 2 short films: The last Screening and Meeting, and of the documentaries: Karib Baiid (So near yet so far), Intihar (Suicide) and Hayda Lubnan (“This is Lebanon”) which received the Excellency Award at the Yamagata film festival, and was broadcasted on ARTE/ZDF/ Al Jadeed and NHK. Layali Bala Noom (Sleepless Nights) is her first feature documentary.

With Nizar Hassan, she founded ITAR productions, and the cross media documentary Arabi Hor (Free Arabs), a project on the dailies of people within the Arab revolutions, that produced 160 short documentaries aired online. She is also one of the founders of the cultural cooperative for cinema Beirut DC , where she was the artistic director of “Ayam Beirut al Cinem’iya” film festival for 6 editions.

True force
“A beguiling act of cinematic interventionism, Eliane Raheb’s debut Sleepless Nights is a true force. Focusing on two powerful characters, the film is a mysterious-yet-lucid meditation on the way a society processes and moves on from civil war. A movie of uncommon complexity, Sleepless Nights is a harrowing exploration of the slow, ambiguous march of history and memory.” -Robert Greene, Hammer To Nail

Asks difficult questions
“The best new documentary at True/False was Sleepless Nights, a wrenching, narratively and thematically dense dual portrait of two people struggling to reconcile their experiences during Lebanon’s civil war in the 1980s. Sleepless Nights is a bold documentary that asks difficult questions about the process of truth and reconciliation in a country still divided among religious and political lines, but it’s also an example of a filmmaker trying to think and work in images.” - Adam Nayman, POV Magazine