Toward a Comparative History of the Modern Mediterranean 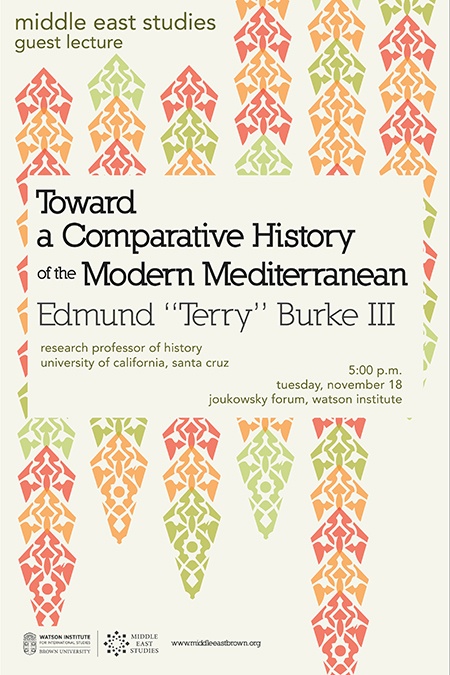 Today, the Mediterranean appears as a land of contradictions–not just the abode of vibrant cultures and histories, but also an economic and political basket case.  Burke suggests that only a world historical perspective can help us to transcend such culturally based views. The modern Mediterranean, he suggests, emerged in the context of deep eco-historical transformations.  These gave rise to common strategies of development as well as divergent outcomes.

Edmund (“Terry”) Burke III is Research Professor of History at the University of California at Santa Cruz, where he directed the Center for World History. He is the author and editor of numerous books and articles on Middle East and North African history, orientalism, environmental history and world history. They include The Ethnographic State: France and the Invention of Moroccan Islam (California, 2014); World History: The Big Eras (with David G. Christian and Ross E. Dunn (Los Angeles, 2011); The Environment and World History (with Kenneth Pomeranz)  (California, 2009) and Genealogies of Orientalism: History, Theory, Politics (with David Prochaska) (Nebraska, 2008). Burke is currently at work on a book on the origins of Mediterranean modernity in eco-historical perspective. A recent article in the Journal of World History (2013) 23:4 provides an over-view of this project.

Watch a recording of the event here.