"Underground Iran" A Musical Festival with Namjoo and Kiosk 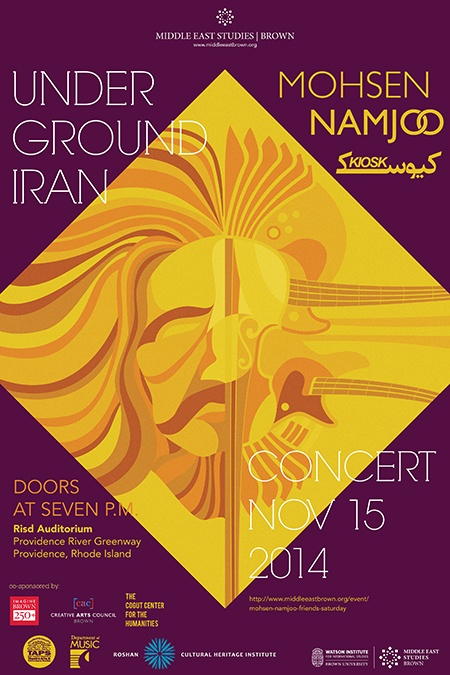 In celebration of Brown’s 250th Anniversary, the musical festival will feature Mohsen Namjoo's band and Kiosk, another Iranian group, on stage together for the first time. Each group – both of whom are banned from playing in their home country– brings a different performative aspect to their message.

Made possible by funding through Brown University's 250th Anniversary, Creative Arts Council (CAC,) Cogut Center for the Humanities, the Department of Theatre Arts and Performance Studies (TAPS,) the Department of Music, and Roshan Cultural Heritage Institute.

A student band will open the concert:

Mohsen Namjoo is an Iranian artist, songwriter, singer, music scholar and setar (traditional Persian lute) player based in Brooklyn, New York. Born in 1976 in Torbat-e Jam, Iran, Namjoo began his musical training at the age of twelve, studying under Nasrollah Nasehpoor until the age of eighteen. In 1994 Namjoo began to study Theater and Music at the University of Tehran, where he was trained under Alireza Mashayekhi, Azin Movahed, and other masters. Namjoo also studied Iranian folk music under Haj Ghorbane Soleimani. His unique music style resembles a patchwork of Persian classical poetry of Hafez, Rumi, or Saadi with western music, namely rock, blues, and jazz. Since 2003, Namjoo has recorded parts of his works in Tehran. His debut album titled Toranj was officially released in Iran in September 2007 with his own voice featured in most of his creations. He has also composed soundtracks for movies and plays, and was featured in the documentary Sounds of Silence (directed by Amir Hamz and Mark Lazarz) which has been screened at international film festivals. He also appeared in a feature narrative film called Few Kilograms of Dates for the Funeral (Director Saman Salur). Namjoo’s first performance outside of Iran was in January 2006 at the Tehran Hotspot of the International Rotterdam Film Festival where he played solo. In 2009, he was sentenced in absentia to a five-year jail term by the Iranian revolutionary courts for allegedly ridiculing the ash-Shams, a sura of Qur’an in the song named “Shams." The conviction took place in spite of his formal apology. After establishing in the West, he sang this song in his Oy album which was produced in Italy in 2009.

In 2008, Namjoo kicked off his first solo US tour, which granted him the Visiting Artist Fellowship at Stanford University, co-sponsored by the Christina & Hamid Moghadam Program in Iranian Studies and the Music Department at Stanford. In 2010, Namjoo partnered with Payam Entertainment to present Namjoo in A Minor with a new ensemble centered around some of his most popular and controversial songs. They performed at the Walt Disney Concert Hall in Los Angeles, the Sony Center in Toronto, Canada and the Herbst Theater in San Francisco. Payam Entertainment released Namjoo’s latest album Useless Kisses in 2011, and Alaki in 2012, with live recording from a performance at the Stanford University in February 2011. In the fall of 2011, Namjoo joined the team of celebrated New York- based Iranian artist Shirin Neshat as the music director of her performance OverRuled, commissioned by the Performa 2011 Festival in New York City. He worked with the Iranian filmmaker, scholar and playwright, Bahram Beyzai on his project commissioned by Stanford University. Namjoo continues touring the world and creating new music. His new album entitled 13/8 was released in the fall of 2012. Hailed as “the Bob Dylan of Iran” by the New York Times, Mohsen Namjoo is a visionary artist who speaks for and touches the souls of today’s youth. His music seamlessly blends the Classical with the Modern, and the ancient with the current.

Pioneers of the underground movement of Iran rock music, Kiosk has been praised for its sharp, smart and satirical lyrics that highlight the paradoxes of Iranian society and the incompetent political system. Kiosk was  ounded in 2003 by Arash Sobhani in Tehran. The band first made a name for themselves by recording material considered “inappropriate” by the Islamic cultural authorities. Prevented from performing in public or  publishing in studios in Tehran, Sobhani moved to the U.S. in 2005. They have recorded six albums, including the acclaimed Ordinary Man (2005), Global Zoo (2008), and Parallel Establishments (2013).

Livestreams of various Namjoo at Brown have received well over 2,000 views in dozens of cities as varied as Tehran, Sydney, Montreal, New York, Oslo, London, and Vienna. All of these activities were made possible by sponsors across the university. Visit the Brown Middle East Studies Youtube Channel to watch past concerts by Mohsen Namjoo.