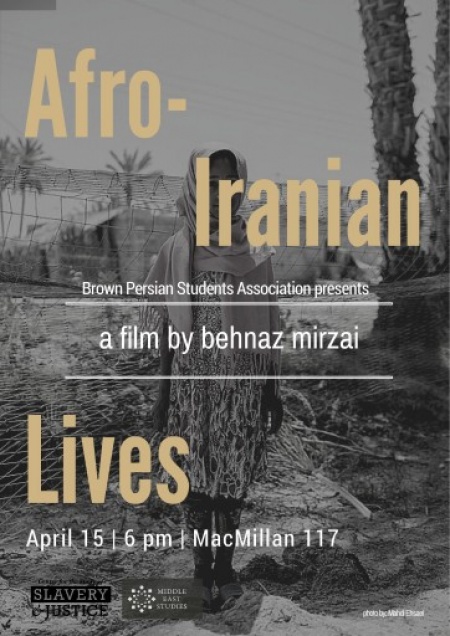 About the film:
This documentary explores the African Diaspora and African cultural heritage in Iran, and the history of the African slave trade, and pays particular attention to socio-economic activities, performances and rituals of the descendants of African slaves in rural and urban communities. Mirzai’s aim was to visualize the lives of Afro-Iranians, who were widely scattered throughout southern regions along the Persian Gulf, and at the same time could preserve and blend African cultural heritage with local religious and traditional elements. By producing this documentary, she intended to demonstrate both the diversity of Iranian society as well as the reconstruction of a new identity of African communities in Iran.

About the director:
Born and raised in Iran, Mirzai moved to Canada in 1997, where she studied slavery and the African Diaspora in Iran. Since then, she has conducted extensive research in European and Iranian archives, fieldwork and interviews in Iran, and published numerous academic articles resulting in this documentary.

Our wish:
The Brown Persian Students Association strives to be inclusive and representative of the diversity of Iranian society and its various communities. The Afro-Iranian community is largely neglected and misunderstood, not just by mainstream society but also by academia — in both Black diaspora and Middle East studies. Yet, there is a rich history, culture and legacy remaining to be heard and cultivated. We believe a screening of this film will work to confront the racist narratives that exist in Iran, in Iranian American communities, and in the US through education and exposure.