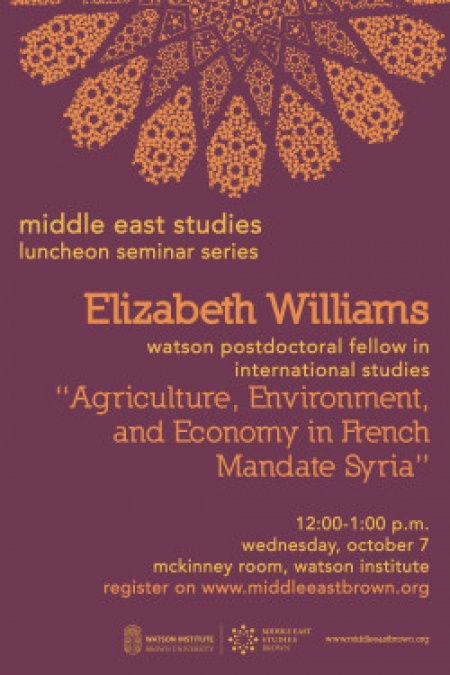 Registration is required through Eventbrite.

Elizabeth Williams is a Postdoctoral Fellow in International Studies at the Watson Institute. Her research examines the relationship between imperial governance, expertise, and the environment. Focusing on the transition from the late Ottoman Empire to the French Mandate period, she analyzes how agricultural technologies emerging during this period intersected with the development of new strategies of rule and conceptions of expertise. By tracing the movement and activities of global, imperial and local actors in networks involved in the production of knowledge regarding these new technologies and their implementation, she investigates intellectual and practical continuities and divergences in approaches to governance during the late Ottoman and French mandate periods and their impacts on rural communities and environmental management. Her work draws on materials from Ottoman and French archives as well as sources from Lebanon, the national archives of the UK and US, and the UN FAO archives in Rome.

During the final decades of the Ottoman Empire a number of urban landowners as well as technocratic elites enthused by the promises of emerging agricultural technologies were eager to experiment with and encourage local farmers to invest in these new techniques. As technocrats shared and compared knowledge through international networks, imperial administrators sought new strategies for reaping the envisioned benefits of these technologies while farmers hedged their bets. The commencement of the French mandate in Syria and Lebanon at the end of World War I would complicate these strategies as local administrators found their projects frustrated by a form of imperial rule that sought to realign the region’s agricultural production, environment, and economy more firmly with the interests of the metropole. This talk will examine the consequences of this shift for subsequent economic and agricultural developments in the region. Mandate agricultural policies tended to marginalize local technocratic proposals and politicize in new ways connections between urban and rural spaces. They also had a long-lasting impact on the local economy, which was still largely agricultural–an impact whose adverse effects were compounded by mandate approaches to environmental management and responses to local environmental crises.