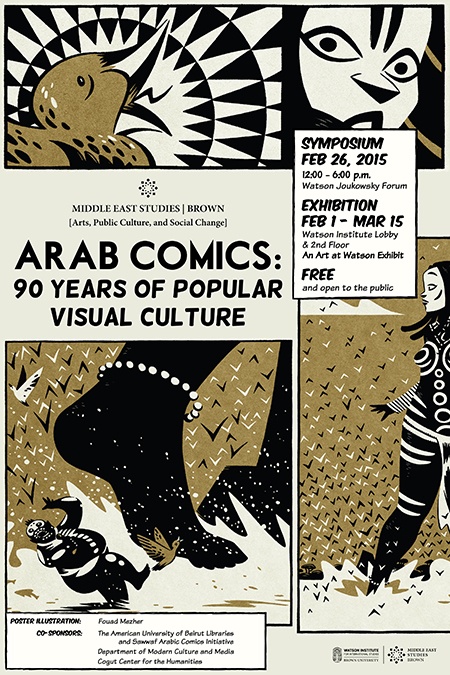 Art at Watson
*Free and Open to the Public

Please note that a simulcast will be available in the South Common Room at the Watson Institute.

Comics have been a complex and subversive form of creative expression for Arab artists, illustrators, and writers since the 1920s. Until today, the visual archive of Arab comics has been absent from mainstream cultural representations of the Middle East. Arab Comics: 90 Years of Popular Visual Culture, a public exhibition hosted by Middle East Studies, will present a close-up engagement with popular comics that have captured young imaginations from North Africa to the Arabian Gulf.

The Arab Comics exhibition will feature the emergent visual culture of pan-Arabism developed in original Arabic children’s comics during the 1950s, 1960s and 1970s; the “Arabization” of Mickey, Tintin and Superman comics for Arab youth during the 1950s, and 1960s; and contemporary comics showcased by the Beirut-based comics collective Samandal.

On February 26th, Middle East Studies will host a half-day symposium on Arab Comics that brings together comics scholars and artists from the United States and Lebanon to discuss the histories of representation and practices of comics illustration in the region. Participants will include the FDZ, Fouad Mezher, Lina Ghaibeh, Michael Allan, and Nadim Damluji.

An interview with Mona Damluji, Mellon Postdoctoral Fellow in visual culture at Wheaton College and curator of “Arab Comics: 90 Years of Popular Visual Culture”, is available on the website of the Watson Institute.

The Art at Watson exhibition and the symposium are co-sponsored by the Cogut Center for the Humanities and the Department of Modern Culture and Media at Brown University, and the Mu’taz and Rada Sawwaf Arabic Comics Initiative and Libraries at the American University of Beirut. The exhibition and symposium are co-curated and co-organized by Mona Damluji and Nadim Damluji.

Find out more about the presenters and invite friends on the event’s official Facebook page!
To learn more information about Arab Comics, please visit: http://www.al-fanarmedia.org/2014/11/arab-comics-fit-academic-exploration/

“Drawing Lines in the Sand: Comics and  Caricature Beyond East/West”

Lina Ghaibeh, Animation Artist and Associate Professor of Animation, American University of Beirut,  “Propaganda in Comics in the Arab World: From Nationalism To Religious Radicalism”

Fadi Baki, Comics Writer and Editor, co-founder of Samandal,“Violence as Language: the inarticulate medium of comics”