Cinematic Matters and Other Extraordinary Cases 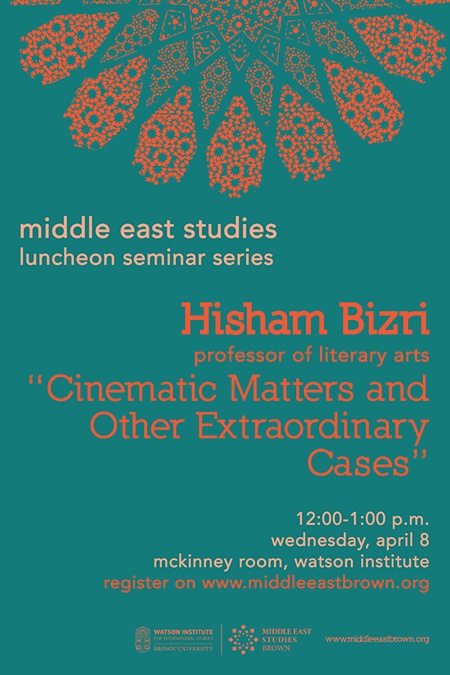 Abstract:
This talk looks at utopia and anti-utopia in Lebanon seen in the extraordinary cases of “divine victories”, professors of politics, practitioners of the art of memory, and lovers of cinema, and how I came to make a film called “Song for the Deaf Ear” (the film will be screened).

Bio:
Hisham Bizri is a film director, writer, and producer, born in Beirut, Lebanon. He started working in films in the US and Hungary with directors Stan Brakhage, RaÃºl Ruiz and MiklÃ³s JancsÃ³ and has directed 25 short films in the US, France, Korea, Japan, Lebanon, and Ireland. His work has been shown in many international venues including Sundance, Cannes, Berlin, Moscow, Oberhausen, Centre Pompidou, the Louvre, and MoMa (NY). Bizri is co-founder of the Arab Institute of Film in Jordan and the recipient of numerous awards such as the McKnight, Jerome, Rockefeller, Guggenheim, and the “Rome Prize”. Formerly Professor of Cinema and Filmmaking at the University of Minnesota, he joined the Literary Arts faculty in July, 2014.