The Hidden Light of Objects: Fiction and the Quotidian in Kuwait 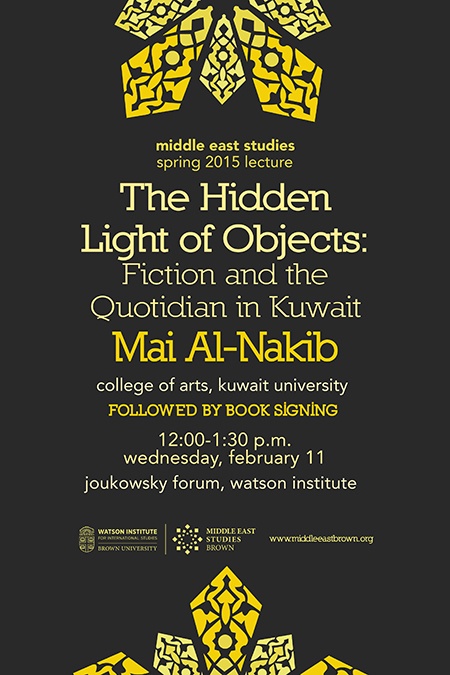 This luncheon lecture will be followed by a book signing.

We are all too familiar with images of the Middle East depicted in mainstream media–often exaggerated and inaccurate, sometimes not as far off the mark as some of us might wish. In recent years, the region has been overwhelmed by occupation, war, revolution, economic crises, and a range of fundamentalisms, among other threats. While the Gulf countries appear relatively calm by comparison with many of their neighbors in the region, this may be a temporary respite. Can the state of Kuwait–site of what might be labeled “the forgotten Gulf war”–provide an alternative view to those currently dominating? In the face of encroaching concerns, what role, if any, can fiction play? Professor Mai Al-Nakib discusses these issues in relation to her recently published collection of short stories, The Hidden Light of Objects.

Mai Al-Nakib (PhD, Brown ’04) is Associate Professor of English and Comparative Literature at Kuwait University. Her research addresses a wide range of issues linked to cultural politics in the Middle East–from Arab feminisms to the ethical question of Palestinians in Kuwait. Her collection of short stories, The Hidden Light of Objects (Bloomsbury US, January 2015), traces overlooked moments in the lives of those who reside in a region often overwhelmed by geopolitics. The Hidden Light of Objects won the Edinburgh International Book Festival’s First Book Award in 2014, the first short story collection to win in the history of the award. She is currently writing her first novel.