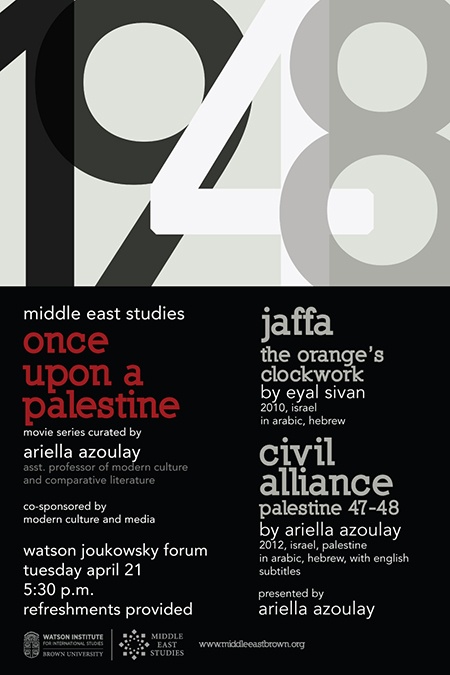 This event is part of “1948 – Once Upon a Palestine,” a film series curated by Ariella Azoulay, Assistant Professor of Comparative Literature and Modern Culture.

About Jaffa – The Orange’s Clockwork:

This film gives a rich visual history of the world-reknown citrus fruit brand – “Jaffa Oranges” – originating from Palestine and exported worldwide since the 19th century. The history of the orange, as depicted by Sivan, is the history of Palestine. Orange groves and the citrus fruit trade were spaces of rich collaboration between Arabs and Jews, until 1948. Jaffa’s orange was one of many symbols used in Zionist discourse to epitomize the “desert we have made bloom.” Based on photographic and cinematographic documents, some going back as far as to the 19th century, Sivan’s film shows the orange groves at a time when Jaffa was one of Palestine’s most populated and thriving cities.

Between November 1947 (The Partition Plan by the UN) and May 1948 (The creation of the State of Israel), many Jewish and Arab communities who cared for their country intensified negotiations between themselves and initiated urgent encounters, some short and spontaneous, others planned meticulously to the last detail, during which the participants raised demands, sought compromises, set rules, formulated agreements, made promises, sought forgiveness, and made efforts to compensate and reconcile. Their shared purpose was to prevent the rising violence in the area from taking over their lives. They sought to protect the common world of their life in Palestine and to salvage it from those who wished to destroy it. Around a map of Mandatory Palestine, thirty Arabs and Jews of varying ages, speaking Hebrew and Arabic, recite the archival documents depicting these events.