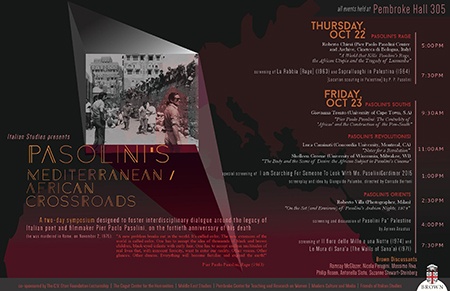 “A new problem breaks out in the world. It’s called color. The new extension of the world is called color. One has to accept the idea of thousands of black and brown children, black-eyed infants with curly hair. One has to accept endless multitudes of real lives that, with innocent ferocity, want to enter our reality. Other voices. Other glances. Other dances. Everything will become familiar and expand the earth!”

co-sponsored by: The C.V. Starr Foundation Lectureship, The Cogut Center for the Humanities, Middle East Studies, Pembroke Center for Teaching and Research on Women, Modern Culture and Media, Friends of Italian Studies

A two-day symposium designed to foster interdisciplinary dialogue around the legacy of Italian poet and filmmaker Pier Paolo Pasolini, on the fortieth anniversary of his death (he was murdered in Rome, on November 2, 1975).

The literary and cinematic work of Pier Paolo Pasolini continues to provide important sources of inspiration for contemporary critical thinkers and artists in relation to notions of race, racism, resistance, gender, the body, myth and contemporary mythologies, mass media, capitalism and the urgency of alternative worldviews. Within this body of work, the symposium will focus in particular on Pasolini’s vision of the Mediterranean and African worlds and its resonance across the fields of film studies and critical theory.

Giovanna Trento (University of Cape Town, S.A), “Pier Paolo Pasolini: The Centrality of ‘Africas’ and the Construction of the Pan-South”

Shelleen Greene (University of Wisconsin, Milwakee, WI),  “The Body and the Scene of Desire: the African Subject in Pasolini’s Cinema”

1:00PM Lunch break & Special screening of “I am Searching For Someone To Look With Me. PasoliniGordimer 2015” (Screenplay by Gianguido Palumbo, directed by Corrado Bertoni)