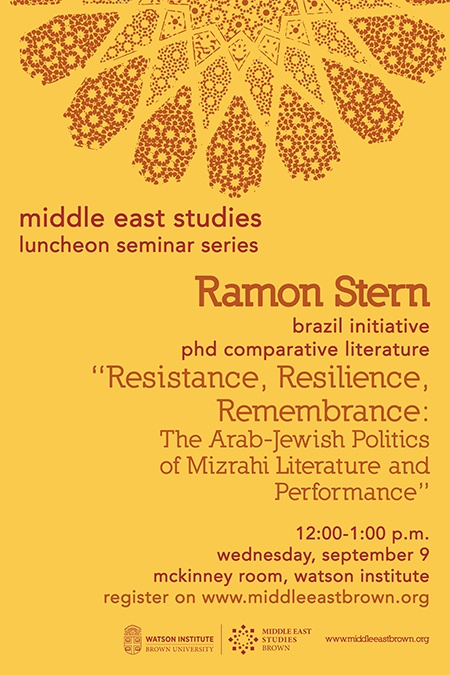 Registration is limited. Reserve a ticket on Eventbrite here. REGISTRATION HAS REACHED THE LIMIT AND IS NOW CLOSED.

Mizrahi Jews, predominantly of Middle Eastern and North African origins, have faced acute discrimination within the Israeli State and a negation of Arab Jewish identities and memories. This talk seeks to address the cultural explosion in the “Mizrahi arts.” especially since the 1980s, and with particular attention to literature. The performance of “Arabness” and Arab Jewishness through musical performance, literary experimentation and film production remain at the margins of exported Israeli identity, but have become more important inside of Israeli society as a means of resistance that also highlights taboo proximities between Mizrahi and larger Middle Eastern and/or Arab culture. Performance arts, literature and film thus become vehicles for symbolic changes in Israeli society and sites of resistance, resilience and remembrance of Mizrahi communities.

Ramon Stern received his PhD in Comparative Literature from the University of Michigan in 2013. His work looked comparatively at Arab ethnicity and immigrant politics as they pertain to literature within Brazil and Israel. He currently works as the manager and coordinator of both the Brazil Initiative at Brown and the Brazilian Studies Association (BRASA).