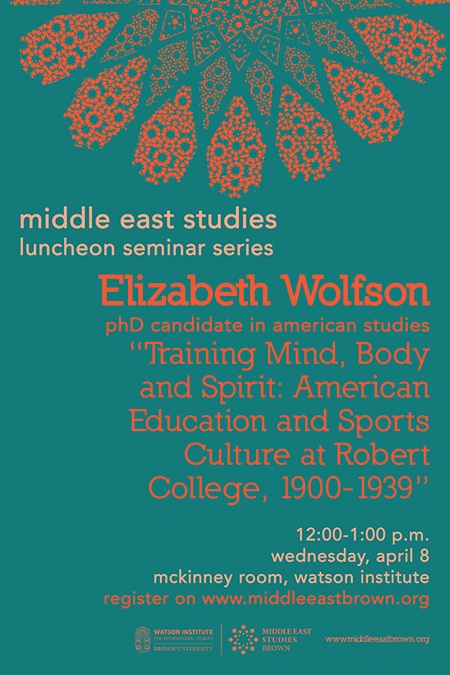 In 1863, American missionary Cyrus Hamlin and New York-based philanthropist Christopher Robert collaborated to found Robert College in Istanbul. The school–which is still operative today–would go on to serve as a model for an entire network of American schools in the Ottoman world and functioned as a key node for American activity in the region throughout the late nineteenth and twentieth centuries. This presentation will use photographs from the Robert College archive to trace the material effects of the American educational enterprise in the late Ottoman Middle East, focusing on the production of the student body through the practice and performance of sports and athletic culture. By considering the student body as both an individual subject located at the nexus of diverse social and disciplinary forces, and as a social group embedded within a range of local and transnational communities, this paper seeks to shed light on the political work of American education within the context of late Ottoman society.

Elizabeth Wolfson is a PhD candidate in the Department of American Studies at Brown University. Her work is focused in the areas of photography studies, transnational American Studies, and the history of U.S.-Middle Eastern relations. Her dissertation, titled “Intimate Encounters: Photography and American Cultural Enterprise in the Ottoman Middle East” uses photographs to write a visual history of Ottoman-American encounters within and around a variety of American institutional spaces constructed throughout the Ottoman empire in the late nineteenth and early twentieth centuries. Her presentation today will focus on material from her first chapter, currently in progress, which takes Robert College in Istanbul as a case study in American Protestant missionary educational work in the region.