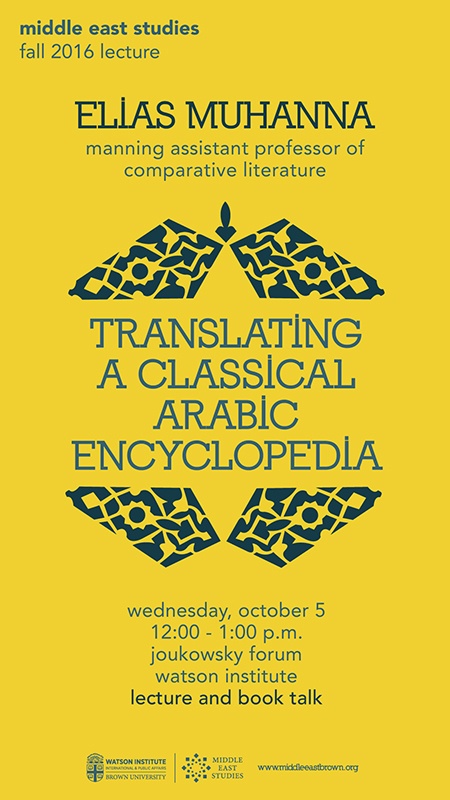 This event is at capacity.

Elias Muhanna reading from “The Ultimate Ambition in the Arts of Erudition: A Compendium of Knowledge from the Classical Islamic World” available August 30, 2016. Shihab al-Din al-Nuwayri (Author) and Elias Muhanna (Editor, Translator, Introduction)

Elias Muhanna is a scholar of classical Arabic literature and Islamic intellectual history at Brown University. His research focuses on encyclopedic texts in the Islamic world and Europe, the cultural production of the Mamluk Empire, and the problem of the vernacular in different literary traditions. His books include the abridged translation of Shihab al-Din al-Nuwayri’s 14th-century Arabic compendium, The Ultimate Ambition in the Arts of Erudition (Penguin, 2016), and an edited volume, The Digital Humanities and Islamic & Middle East Studies (De Gruyter, 2016).His doctoral thesis from Harvard University was awarded the Bruce D. Craig Prize from theMamluk Studies Review in 2012, and is the basis of a monograph on the history of Arabic-Islamic encyclopedic literature in the 13th-15th centuries, which is forthcoming next year. At Brown, Muhanna directs the Digital Islamic Humanities Project, a multi-year initiative that convenes an annual conference and hosts a variety of research activities. In addition to his academic writing, Muhanna is a frequent contributor to such publications as The Nation, The New York Times, and The New Yorker.