The Coup, the Purge, and the Future of Democracy in Turkey: A Teach-in 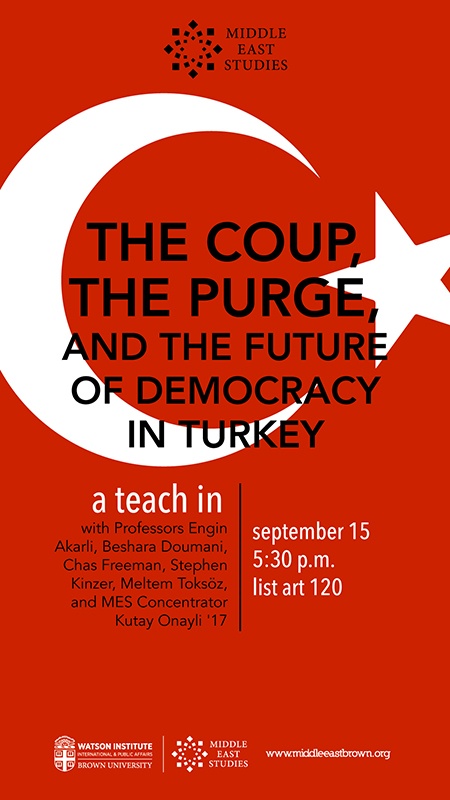 Aside from a primer on the attempted coup and the purge that followed it, the teach-in will focus on four main themes:

*Impact on academic freedom in universities and the health of the educational system in general
*Future of democracy in Turkey
*Geo-political consequences for the Middle East region, especially in relation to Syria and the Kurds
*US-Turkish relations

Chas Freeman, Senior Fellow in International and Public Affairs,Watson Institute for International and Public Affairs
Ambassador Freeman was assistant secretary of defense for international security affairs (1993-94), earning the highest public service awards of the Department of Defense for his roles in designing a NATO-centered post–Cold War European security system and in reestablishing defense and military relations with China. He was U.S. ambassador to Saudi Arabia (1989–92) during Operations Desert Shield and Desert Storm.
Abstract: Many of the shared purposes and most of the warmth have disappeared from US-Turkish relations. On a large number of issues, America has no alternative to Turkey as a strategic partner but Turkey is now able to pursue independent policies. Its policies are increasingly at odds with those of the United States and its other NATO allies. The retreat of Turkish democracy is an impediment to rapprochement but not necessarily an insuperable one if Ankara and Washington can reaffirm a reduced agenda of common interests that incorporates Turkish as well as American perspectives. There is hard bargaining and a difficult process of mutual adjustment ahead.
Title of presentation: "Turkey in the New Geopolitical Context"

Stephen Kinzer, Senior Fellow in International and Public Affairs,Watson Institute for International and Public Affairs
Stephen Kinzer is an award-winning foreign correspondent whose articles and books have led the Washington Post to place him “among the best in popular foreign policy storytelling.”
Kinzer spent more than 20 years working for the New York Times, most of it as a foreign correspondent. He was the Times bureau chief in Nicaragua during the 1980s, and in Germany during the early 1990s. In 1996 he was named chief of the newly opened Times bureau in Istanbul. Later he was appointed national culture correspondent, based in Chicago.
Title of presentation: "Roots and Results of Turkey's Anger"

Meltem Toksöz, Adjunct Instructor in Middle East Studies,Middle East Studies Program
Meltem Toksöz received her PhD in Ottoman History from SUNY Binghamton (2001) where she worked with the late Donald Quataert. She is associate professor at the History Department of Bogazici University, and has been at many research institutions such as the Wissenschaftskolleg zu Berlin, and Koç University Research Center for Anatolian Studies.
Title of presentation: “Whither the Intelligentsia in Turkey? Authoritarianism and Opposition in Modern Turkish Society”

Kutay Onayli’17
Kutay is a double concentrator in Middle East Studies and Comparative Literature with a focus on Turkey and Greece. Originally from Istanbul, he was a project coordinator for Turkish election transparency NGO “Oy ve Otesi” in two recent elections, and writes regularly for ThePressProject, Greece’s largest independent online news portal.
Title of presentation:“Of Dogs and Horses: Anxiety and Paranoia in Post-Coup Turkey”