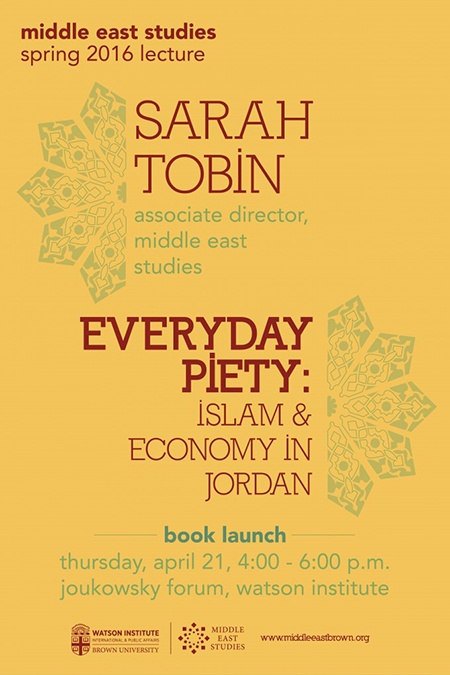 Details about ordering the book through the publisher are included on this flier.

Drawing on in-depth ethnographic fieldwork in Amman, Everyday Piety: Islam and Economy in Jordan demonstrates that Muslims combine their interests in exerting a visible Islam with the opportunities and challenges of advanced capitalism in an urban setting, which ultimately results in the cultivation of a “neoliberal Islamic piety.” Neoliberal piety, Tobin contends, is created by both Islamizing economic practices and economizing Islamic piety, and is done in ways that reflect a modern, cosmopolitan style and aesthetic, revealing a keen interest in displays of authenticity on the part of the actors. Tobin highlights sites at which economic life and Islamic virtue intersect: Ramadan, the hijab, Islamic economics, Islamic banking, and consumption. Each case reflects the shift from conditions and contexts of highly regulated and legalized moral behaviors to greater levels of uncertainty and indeterminacy. In its ethnographic richness, this book shows that actors make normative claims of an authentic, real Islam in economic practice and measure them against standards that derive from Islamic law, other sources of knowledge, and the pragmatics of everyday life.

Dr. Sarah A. Tobin is an anthropologist with expertise in Islam, economic anthropology, and gender in the Middle East. Her work explores transformations in religious and economic life, identity construction, and personal piety at the intersections with gender, Islamic authority and normative Islam, public ethics, and Islamic authenticity. Ethnographically, her work focuses on Islamic piety in the economy, especially Islamic Banking and Finance, Ramadan, and in contested fields of consumption such as the hijab, and the Arab Spring, as well as with Syrian refugees.