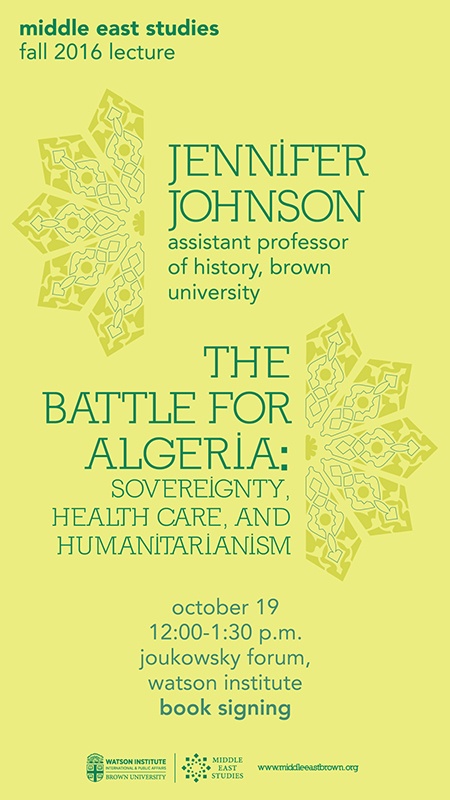 Registration is no longer open for this event.

The Battle for Algeria: Sovereignty, Health Care, and Humanitarianism reinterprets one of the most violent wars of decolonization: the Algerian War (1954-1962). It argues that the conflict was about whom—France or the National Liberation Front (FLN)—would exercise sovereignty of Algeria. The fight between the two sides was not simply a military affair; it also involved diverse and competing claims about who was positioned to better care for the Algerian people’s health and welfare. Johnson focuses on French and Algerian efforts to engage one another off the physical battlefield and highlights the social dimensions of the FLN’s winning strategy, which targeted the local and international arenas. Relying on Algerian sources, which make clear the centrality of health and humanitarianism to their war effort, the book demonstrates how the nationalist leadership constructed national health care institutions that provided critical care for the population and functioned as a proto-state. Moreover, its representatives used post-war rhetoric about rights and national self-determination to legitimize their claims, which led to international recognition of Algerian sovereignty. Johnson’s work deprovincializes North Africa and proposes a new way to analyze how newly independent countries and nationalist movements engaged with the Third World and the international order. About the Presenter:

Jennifer Johnson is an assistant professor of history at Brown University. She received her PhD from Princeton University and previously taught at Lehman College and the City College of New York. Her main research interests are 20th century Africa, specifically the Maghrib, nationalism, decolonization, and public health. She is the author of The Battle for Algeria: Sovereignty, Health Care, and Humanitarianism (University of Pennsylvania Press, 2016). Her work has also been published in the International Journal of Middle East Studies and Contemporary European History. With the support of a Woodrow Wilson Fellowship, she is currently working on a second book project which examines medicine and public health in postcolonial North Africa between 1956 and 1975.