CANCELLED: Luncheon Seminar | After Displacement: Vernacular Modernity in the Quest for a Viable Resettlement 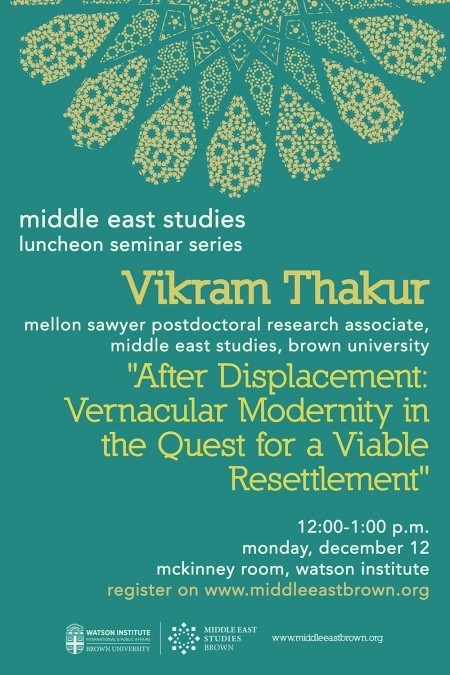 Vikramaditya Thakur completed his PhD in sociocultural anthropology from Yale University in 2014. His doctoral dissertation studied the forced relocation of Bhils, a hill community in rural western India, to resettlement colonies in the plains by the state due to one of the largest dams in the world. The dissertation analyzed both forced displacement and the subsequent resettlement not as a one-off event but as an intergenerational phenomenon mediated by democratic processes and social movements and divergent aspirations across generations in families. His subsequent fieldwork studied the integration and transformation of the resettled Bhils as they became embedded in an economy marked by cash-crop agriculture from an earlier one based on subsistence farming. His research interests include development studies, political anthropology, agrarian studies, and environmental and social history.

What follows when an illiterate hill community, categorized as a Schedule Tribe group, living in a remote hilly area and lacking formal land titles, gets forcibly displaced in the wake of a state project such as a dam? In the last few decades, forced displacement of rural population by the state for development projects has become a huge phenomenon particularly in the countries of the global South. Mobilization by activists opposing these projects too has been strong in many cases and has drawn a lot of attention from academics. This paper, in contrast, studies the process of events in the wake of a celebrated anti-dam movement against the huge Sardar Sarovar Project dam on River Narmada in western India analyzing what happened after the displacement. After the movement failed to stall the dam, the affected groups accepted the state’s offer to move to relocation colonies even as their mobilization took a new shape to demand better amenities in the new location. Based on ethnographic study along with archival data, I explore the nature of subaltern leadership and its role in negotiation for greater resources from the postcolonial state. I show how subaltern leadership matures over time along with the growth of a social movement to subsequent chart their own independent course. By making transient alliances with various groups, including external social activists and political parties a new generation of tribal youth leaders is able to negotiate with the modern state in novel ways. I argue that outside the narrow sphere of elite urban activists possessing English, a language possessing global currency, there is a realm of dissenters from the hinterlands, only conversant in the vernacular, that has been engaging with the state and its modern projects constructively to shape their own resettlement for decades. In the process I show that forced resettlement is not a one-off event but a long-drawn process and an intergenerational phenomenon.