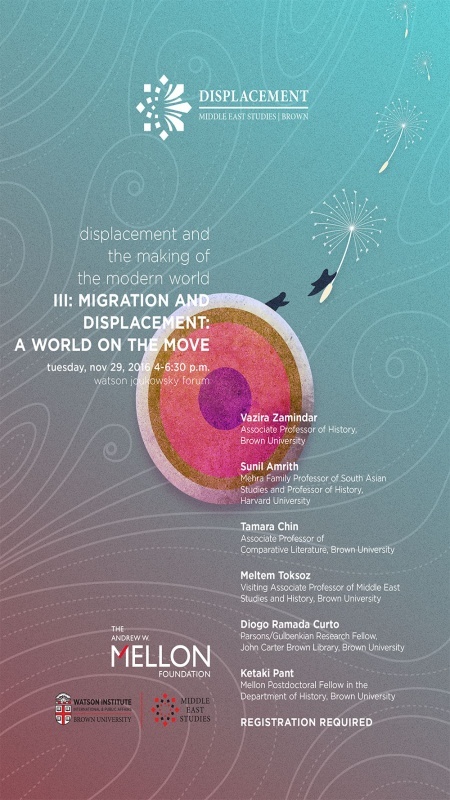 Sunil Amrith is the Mehra Family Professor of South Asian Studies at Harvard University. His research is on the trans-regional movement of people, ideas, and institutions. Areas of particular interest include the history of public health and poverty, the history of migration, and environmental history. His most recent work has been on the Bay of Bengal as a region connecting South and Southeast Asia. He has a PhD in History (2005) from the University of Cambridge, where he was also a Research Fellow of Trinity College (2004-6). Professor Amrith’s 2013 book Crossing the Bay of Bengal: The Furies of Nature and the Fortunes of Migrants integrates environmental, economic, and political histories to explore waves of migration and trade connecting the shores of the Bay of Bengal and serves as the seminar’s common reading.

Meltem Toksöz is Associate Professor of History and Director of the Center for Asian Studies at Bogaziçi University and joins Brown as Visiting Associate Professor of Middle East Studies and History for the 2016-2017 academic year. She holds a PhD in History from SUNY Birmingham and has published widely on Ottoman economic and social history, economic thought, and historiography. Her monograph Nomads, Migrants and Cotton in the Eastern Mediterranean: The Making of the Adana-Mersin Region in the Ottoman Empire, 1850-1908 (Brill, 2011) traced processes of forced settlement, land reform, and the development of the cotton trade in late Ottoman Çukurova.

Diogo Ramada Curto has been teaching and researching since 1981 at the New University of Lisbon (Universidade Nova de Lisboa), Portugal and is now David R. Parsons/Gulbenkian Foundation Research Fellow at the John Carter Brown Library. He works mainly on Portuguese history in a global and comparative perspective during the early modern period, with particular attention to the following fields: history of books and written cultures, patriotism and political cultures, colonial projects and imperial cultures. Between 1998 and 2005 he founded and edited a series of books combining history and social sciences, where he published more than thirty books. In 2010, with two younger scholars, he launched a new series called “História e Sociedade”, where ten books have been already published.

Ketaki Pant, Postdoctoral Associate at Brown’s Cogut Center for the Humanities, is a historian with anthropological leanings whose research interests center on South Asia as part of the Indian Ocean world. Her first book project “Homes of Capital: Merchants and the Historical Imagination across Indian Ocean Gujarat” examines nineteenth- and twentieth-century intersections of political economy and the historical imagination among Muslim and Parsi merchants of Gujarat. This project explores the perseverance of a long-historical imagination of Indian Ocean itinerancy within historic merchant homes, in texts, artworks, material objects and historical memories. It shows that this imagination was an important form of capital to Gujarat’s merchants and shaped their engagement in oceanic and global trade. Her second project is an ethnographic history of the nineteenth-century Muslim zanana (harem) of the Indian Ocean. Pant’s other interests include the oceanic journeys of the Gujarati language and ethno-memoir as a genre of analytic writing.