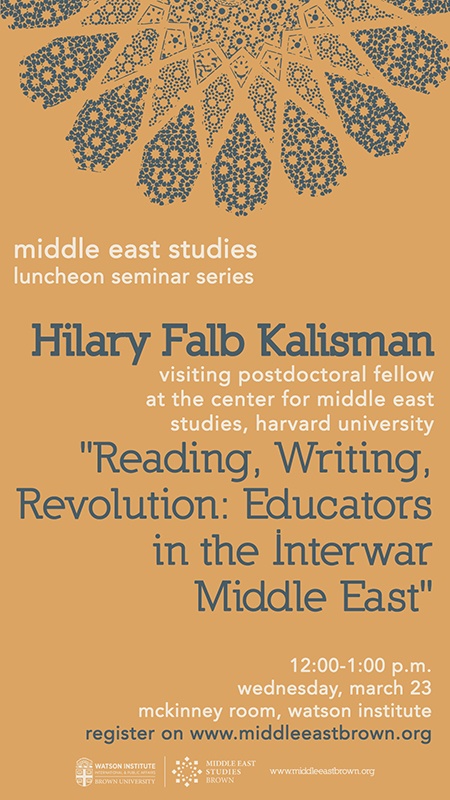 Registration is required through Eventbrite.

During the early to mid-20th century, public school teachers across the Middle East enjoyed a privileged position: as popular and scarce civil servants, they manipulated, petitioned, and protested against multiple governments, while rising through the ranks of state employment.

This talk asks, what did the clear associations between public education, transnationalism, anti-government activism and government office mean for Middle Eastern politics during the tumultuous interwar period? What trends do we expose by doing a transnational rather than a national history of public schooling?

Despite the Mandates tutelary mission of civilizing and modernizing the former Arab provinces of the Ottoman Empire, and intense local demand for education, British policies limited government schooling during the Mandate period. British policymakers feared too much, and too academic education would produce underemployed, anti-British nationalists. A lack of replacements allowed educators to criticize the states that employed them, without fear of permanent dismissal. Rebellious actions and ideological currents, as well as the teachers themselves, traversed national boundaries. However, while teachers rendered their profession a site of protest, their symbiotic dependence on state employment for their livelihoods meant their rebellions were relatively conservative; they tended to avoid seeking the collapse of their governments as a whole.

Hilary Falb Kalisman is a Visiting Postdoctoral Fellow at the Center for Middle Eastern Studies at Harvard University, and a Visiting Scholar of Middle East Studies at Brown University. She completed her PhD in History at the University of California Berkeley in May, 2015. She was a visiting scholar at the Zvi Yavetz School of Historical Studies,Tel Aviv University during the 2014/2015 academic year. Her dissertation “Schooling the State: Educators in Iraq, Palestine and Transjordan c. 1890-c.1960” created a collective biography of government employed teachers and administrators in order to explore the relationship between public education and political culture during the formative period of the nation-state in the Middle East. She won numerous awards during the course of her research including a National Academy of Education/Spencer Dissertation Fellowship, an American Academic Research Institute in Iraq Research Fellowship, and an Institute of International Education Graduate Fellowship. She graduated from Brown University in 2006, Magna Cum Laude, Phi Beta Kappa with honors in Middle East Studies.