The Search for City in the Rapid Urbanisation of Doha, Qatar 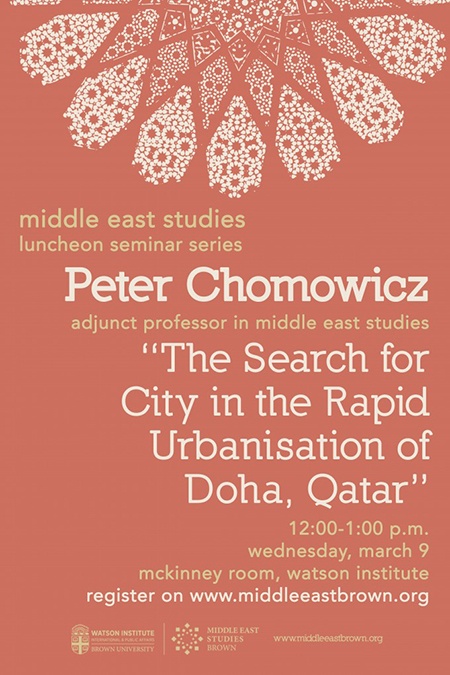 She looked over his shoulder
For vines and olive trees,
Marble well-governed cities
And ships upon untamed seas,
But there on the shining metal
His hands had put instead
An artificial wilderness
And a sky like lead.

The Search for City in the Rapid Urbanisation of Doha, Qatar Peter Chomowicz

In 1950, Doha, Qatar, was home to barely 12,000 souls, who clung precariously to the shores of the Arabian Gulf. Since then Doha’s dirt lanes and mud-brick hovels have been transformed into a major metropolis of over 2 million, whose architectural manners both embody and reflect the regime’s geo-political ambitions.

This radical transformation reveals a tension between the regime’s aspirations and the expectations of its (mostly foreign) constituents that discloses the possibilities and limitations of civic culture in the late twentieth and early twenty-first century.

While we are tempted to view the diverse mixture of architectural styles in Doha as simply post-modern attempts at a cultural continuity linking ‘tradition’ with ‘modernity’, this talk shall explore how the city, its architecture, reflects, embodies and represents a reform movement, a movement meant to seek an orientation in history and contemporary world affairs.