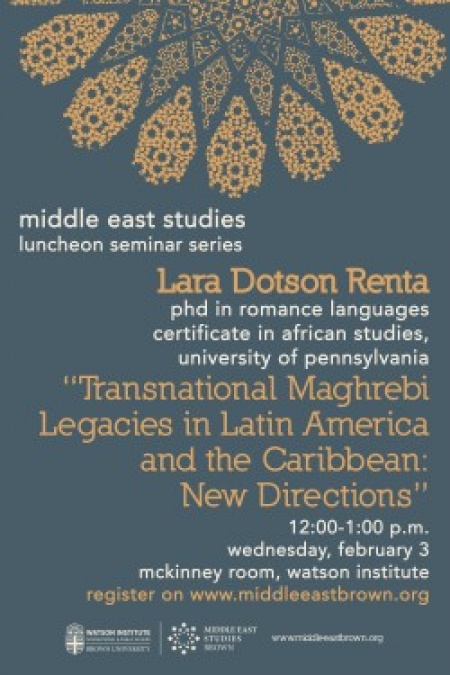 Register through Eventbrite here. Registration has reached its limit. Please check back from time to time.

**Lunches for registered guests will be held until 12:00 noon, then released for those on standby.

Dating back over five centuries, there has existed a legacy of artistic, literary, and political cross-pollination between Latin America, the Maghreb, and the Arab Diaspora. Indeed, the expulsions and encounters of 1492 signaled not only the start of the Spanish Empire in the Americas, but also the forging of a link between Latin America and Spain’s Muslim heritage of Al-Andalus. Through an analysis of transnational, trans-Atlantic literary and media cultural production, Dotson-Renta traces the musical and migratory routes of Arab culture from the Maghreb to Spain and on to the Americas, where Arab culture is currently being fused and (re)claimed as local. Transnational literary exchanges include Franco-Moroccan novelist Tahar ben Jelloun’s references to Jorge Luis Borges in L’enfant de sable, as well as poetic works such as “In the Shadow of Al-Andalus,” an homage to a shared heritage and a reconstituted sense of ‘homeland’ written by Victor Hernández Cruz, a Puerto Rican who divides his time between Morocco and Puerto Rico. Such literary works recalibrate ‘Arabness’ and ‘otherness’ within a Latin American context. From the perspective of musical traditions, in recent years Latin American artists have notably joined forces with Arab artists to create musical works that reflect a renewed connection with the Arab world. Such blending have even become ‘institutionalized’ in the Margheb, as seen in the numerous Latin American artists who were featured at the 2013 Festival des musiques sacrées in Fès, with the year’s theme of ‘Al-Andalus’. In popular culture, another example is seen in the Brazilian blockbuster soap opera El Clon, which focuses on a Moroccan-Brazilian protagonist, while, in music, we see musical collaborations such as those between Cuban-American rapper Pitbull and Algerian Cheb Khaled. Thus, we can see Latin America as a site where North African legacies are revitalized and deployed anew, thereby remapping what constitutes ‘Latin American’ or ‘Maghrebi’ locations of culture. Dotson-Renta’s paper seeks to explore the ways in which Spanish Al-Andalus/Maghrib and the concept of ‘Moorishness’ emerge as referents for a shared cultural lineage, as well as a way by which artists activate a uniquely Latin American conceptualization of shared History and Space with the Maghreb. 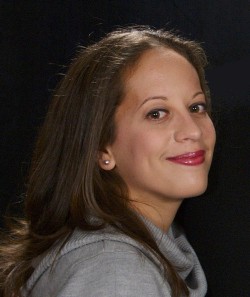 Lara N. Dotson-Renta holds a PhD in Romance Languages and a Certificate in African Studies from the University of Pennsylvania. She has a Master’s degree in French Literature from New York University in Paris, as well as a Bachelor’s degree in French and Spanish from Dartmouth College. Previously an Assistant Dean/Assistant Professor at Quinnipiac University, she is currently a Visiting Scholar with the Middle East Studies program at Brown University. She has been published in several academic journals, and her book, Immigration, Popular Culture, and the Re-Routing of European Muslim Identity, was released by Palgrave Macmillan in 2012. Dr. Dotson-Renta is also the founder and editor-in-chief of The Postcolonialist, an online interdisciplinary and multilingual publication on postcolonial societies and politics.