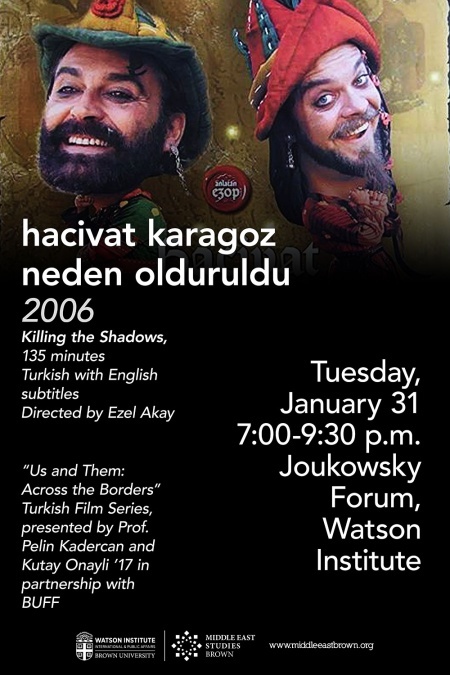 “Us and Them: Across the Borders” MES film series on Displacement, presented by Prof. Pelin Kadercan and Kutay Onayli ’17 in partnership with BUFF (Brown Film Forum)

Karagoz and Hacivat lived and died during the first clashes of the decaying Eastern Roman Empire and the early Ottomans of the 14th century Anatolia. Their stories and characters have been adapted for the traditional shadow theatre of the later Ottoman Empire, in modern Turkey and all over the Middle East, Greece and western Asia. Their legend and the truth about their tragic deaths are twisted and distorted, but their caustic humor still lives on. "Hacivat Karagoz Neden Olduruldu?" (Who Killed the Shadows?) opens in 14th century Bursa, a lovely city on the border of the Byzantine Empire. Bursa hosts a multicultural life under the rule of the Ottomans, an emerging small Turkish tribe of that time. People who are exhausted from the tax hungry Mongolian attacks immigrate for a new life to this liberal city, which is also a shelter for the ruling class from various crumbling states and governments. Among those seeking refuge, is an illiterate but highly intelligent and sensitive Turkoman nomad, Karagoz, and a sharp, garrulous messenger, Hacivat. From the moment they meet, their conversations entertain those around them and eventually, they start to present stand-up shows where they humorously criticize the religious and civil authorities, and quickly accumulate a long list of enemies.