Peter Green Lecture with Suad Joseph | State of the Family and the Family of the State: Critical Arab Family Studies 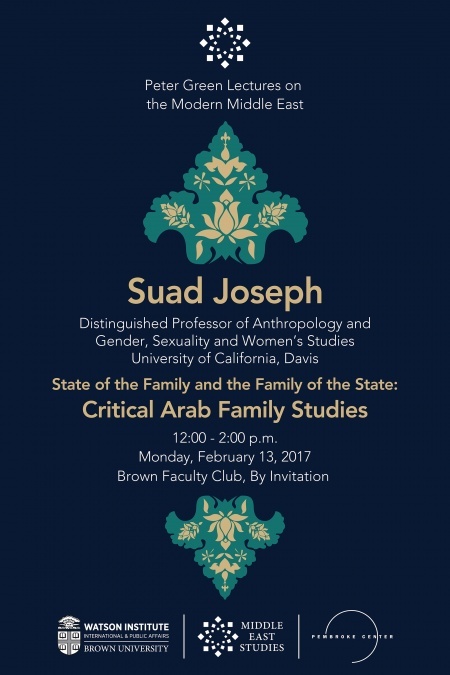 By invitation and registration. At capacity.

"State of the Family and the Family of the State:  Critical Arab Family Studies”

Suad Joseph is an internationally recognized leading scholar of Middle East gender and family studies.  Her research has focused on the relationships between religion and politics, family and the state, gender and citizenship, children and rights, and culturally specific notions of selfhood.  She has been an important institution-builder:  She founded a group leading to the establishment of the Middle East Section of the American Anthropological Association; she founded the Association for Middle East Women's Studies and co-founded its internationally recognized journal – Journal of Middle East Women’s Studies; she founded the Arab Families Research Group; and a six-university consortium. She co-founded the Arab American Studies Association and the Association for Middle East Anthropology.  She was the president of the Middle East Studies Association of North America, the main professional association for scholars of the Middle East.  She co-founded the Women and Gender Studies Program and founded the Middle East/South Asia Studies Program at UC Davis.   As the Faculty Advisor to the Chancellor since 2014, she is no longer teaching undergraduate classes.  However, she is an acclaimed teacher. She was awarded the UC Davis Prize for Undergraduate Teaching and Research, the largest such prize in the United States.  She was awarded the graduate mentor award by the Consortium for Women and Research. Her public service has been recognized as well.  She was awarded the Diversity Leadership award and the Distinguished Scholarly Public Service Award by UC Davis.  Her research has not only been path-breaking, but also committed to supporting the research of colleagues.  She is General Editor of the highly esteemed Encyclopedia of Women and Islamic Cultures- the first encyclopedia of its kind, which Choice, the magazine for librarians, ranked as “essential” for libraries.   She has edited or co-edited 8 books, and published over 100 articles.  She has raised nearly $5 million for institutional educational development for the Middle East/South Asia Studies Program, and nearly $10 million for research programs, supporting and training undergraduate and graduate students for research.  For the past decade and half, she has been committed to offering training in proposal writing and research design to young scholars in the Middle East, Europe, and the United States.

Co-sponsored by the Pembroke Center