Luncheon Seminar | Between the Archive and the People: The Arabic Novel in the Age of Disillusionment 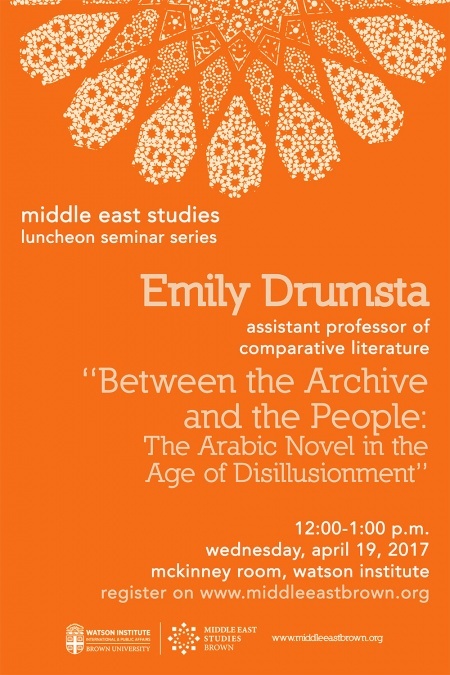 "Between the Archive and the People: The Arabic Novel in the Age of Disillusionment."

Abstract: During the nineteen-forties and fifties, Arabic novels were widely populated by characters who figured the notion of “resistance” in concrete terms—from the pseudo-proletarian fellah in the Egyptian literary imagination to the third-world-liberation-minded fida’i in the Palestinian and Lebanese contexts. Yet following a series of political and military defeats in the late nineteen-sixties and seventies, authors in Egypt and the Levant began to take a different tack, staging the literal “disappearance” of these figures of in order to dramatize the collapse of the utopian socialist imaginary. In this talk, I offer readings of several novels from across the region that center around the disappearance of one character and the “search” or “investigation” conducted for that character by a self-questioning frame narrator. I identify “investigation” (bahth, tahqiq) as an ironic, metafictional narrative practice through which Arab authors from Egypt and the Levant interrogated certain forms of political language, contested the premises of historiography, and most importantly, reconsidered the author’s role in society during this period of historical upheaval. Finally, I argue that investigation was a narrative practice central to the historical moment of the 1970s and 80s, as it allowed authors to distance themselves from the political and literary languages they depict as rife with “pulverized,” “meaningless,” “worn out,” or “featureless” words.

Bio: Emily Drumsta is Assistant Professor of Comparative Literature at Brown University. She specializes in modern Arabic and Francophone literatures, with particular focus on form and disillusionment in the Arabic novel, the politics of meter in modernist Arabic poetics, and negotiations of language and identity in North African literature and culture. Her current book project explores how late twentieth-century authors in Egypt, Palestine, and Lebanon use the trope of investigation to interrogate the notion of “resistance literature” and decouple the figure of the author from authority and authoritativeness. She is also working on translations of selected work by the Iraqi modernist poet Nazik al-Mala’ika, and of Je t’offrirai une gazelle, a novel by the Algerian Francophone author Malek Haddad. She is a co-founder of Tahrir Documents, an online archive of newspapers, broadsides, pamphlets, and other ephemera collected in Cairo’s Tahrir Square during the 2011 uprisings in Egypt. She holds a Ph.D. from the University of California, Berkeley and an A.B. from Brown University.