Ahoo Najafian — Staging the Aborted Past: Scenes from Alternative Theater in Iran 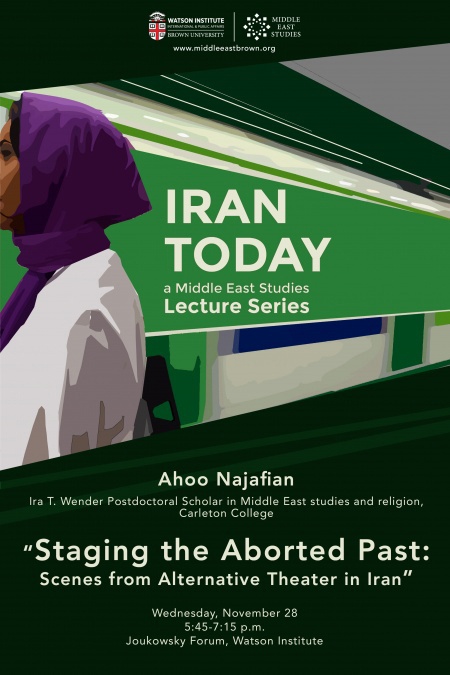 “Iran Today”  is a year-long series of sophisticated discussions on contemporary Iranian society and culture intended to address the general lack of knowledge and sensational coverage circulated in US media.

The theater is booming in Iran. At the moment, more than ninety plays are on stage only in Tehran and in official theaters; many more are being played underground without official permits. The official plays range from adaptations of Beckett’s Endgame, Sartre’s Nausea, and Shakespeare’s A Midsummer Night’s Dream, to original plays by older and younger generations of Iranian playwrights, to plays on religious figures, including a marionette opera about the events of Karbala.

In this talk, Ahoo Najafian focuses on some works by the award-winning playwright Kamran Shahlaei who collaborates with different creative groups in order to stage “alternative plays” in Iran. While diverse in setting, tone, and genre – from conversations between the executioner in the Arabian Nights and the King’s wives before Shahrzad to a documentary theater on the events of  the 1981 bombing of the Prime Minister’s Office – the plays share the theme of remembering and staging the past. Through a review of some of these plays, she offers a tableau of how the past is presented in Iran today.

Ahoo Najafian is the Ira T. Wender Postdoctoral Scholar in Middle East Studies and religion at Carleton College. She holds a B.A. and M.A. in English literature from the University of Tehran, M.A. in gender studies from the University of British Columbia, and a Ph.D. in religious studies from Stanford University. She studies how cultures understand and reproduce themselves across time. Her research explores the relationship between the different notions of literature and religion with a focus on Persianate literature and Islamicate cultures. She is also interested in contemporary art of the Middle East and has worked with Iranian artists on collaborative projects. Her current project, “Poetic Nation,” investigates the intersections of religion, poetry, and politics in twentieth-century Iran through the category of mysticism (ʿerfan) and follows a range of nation-building enterprises, from Islamism to Communism, materialized in the ways in which the fourteenth-century poet Hafez and his poetry are understood.