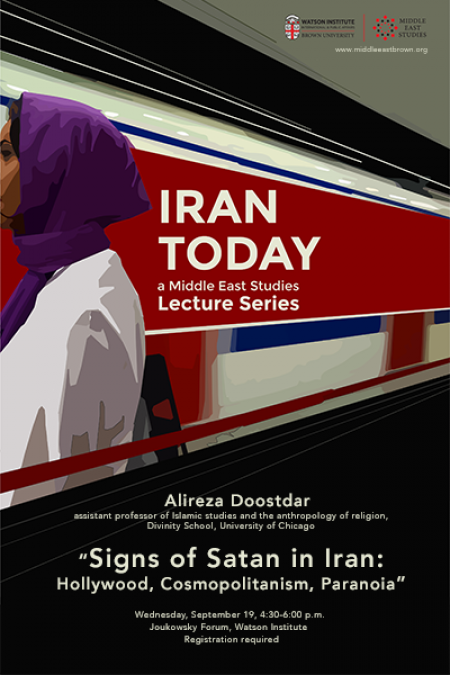 “Iran Today”  is a year-long series of sophisticated discussions on contemporary Iranian society and culture intended to address the general lack of knowledge and sensational coverage circulated in US media.

Hollywood productions live complex social lives in Iran. They are consumed as objects of entertainment, contemplated as vehicles of spiritual meaning, and criticized as agents of Western cultural influence. With fantasy and horror cinema, these diverse responses take on existential weight, nurturing metaphysical speculations and feeding paranoid conspiracies. In his presentation, Alireza Doostdar examines Hollywood’s Iranian circulations as windows onto a distinctive mode of spiritual cosmopolitanism, reflecting on the manifest and occult ways in which cinema configures people’s lives.

​Alireza Doostdar is assistant professor of Islamic studies and the anthropology of religion at the Divinity School and the College, University of Chicago. His first book, The Iranian Metaphysicals: Explorations in Science, Islam, and the Uncanny (Princeton University Press, 2018), examines the rationalization of the metaphysical “unseen” in Iran since the early twentieth century. Through ethnographic and historical analysis, it considers a range of knowledges and practices usually treated as marginal to orthodox Islam: sorcery and occult sciences, séances with the souls of the dead, jinn exorcisms, the marvels of Shi‘i mystics, and various New Age-inflected therapeutic spiritualities.

His second book project, tentatively titled “The Idea of an Islamic Social Science” examines Iranian attempts to “Islamize” social scientific and humanistic inquiries by placing them in conversation with Islamic philosophy, theology, ethics, and mysticism. Other interests include Iranian spiritual cinema and its engagements with Hollywood sci-fi, fantasy, and horror, and the embodiment of the Islamic state through everyday practices and acts of intimacy.