CANCELED: Alex Winder – Race, Religion, Empire, and the Palestine Police: In Pursuit of "A Suitable Proportion of 'Neutrals'" 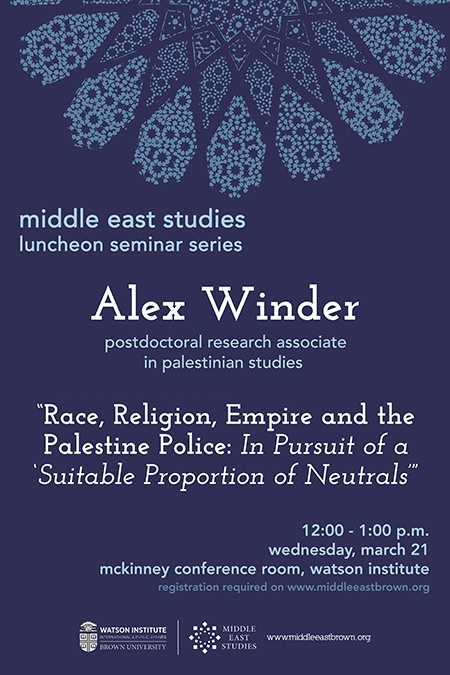 Registration is at capacity. Unclaimed seats will be allotted on a first-come, first-served basis at the start of the event.

As in other colonial territories, "security" was a cornerstone of the British Mandate government established in Palestine after World War I. This required not only the management of anti-colonial movements directed against British rule, but also the management of intercommunal conflict within Palestine, particularly between Jews and Arabs. British policies, particularly its commitment to establishing a Jewish "national home" in Palestine (announced in the Balfour Declaration of 1917 and later incorporated into the terms of the Mandate itself), provoked increasing resistance from Palestine's Arab population and fueled tensions between Jewish and Arab communities. The Palestine Police (comprised of Britons, Arabs, and Jews) thus became increasingly central to debates, within the British administration and in Palestinian society, over security strategy. Both Arab and Jewish communities voiced complaints regarding the fairness of the police, and British officials expressed concerns that Arab and Jewish policemen would, in moments of intercommunal conflict, show greater loyalty to coreligionists or conationals than to the ideals of "law and order."

These anxieties prompted British officials to search for "neutral" policemen drawn from other British imperial domains to serve in the Palestine Police. The introduction of former members of the Royal Irish Constabulary and their auxiliary units (known as Black and Tans) into Palestine in 1922 has drawn significant attention in scholarship on the Palestine Police, and this talk will place this personnel transfer in the context of proposals to bring policemen from Cyprus, India, Iraq, and Sudan to Palestine. These discussions and proposals illuminate the fundamental importance of racial and religious categories in British colonial policing, and demonstrate how the composition of the Palestine Police was shaped not only by dynamics within Palestine, but by broader imperial considerations.

Alex Winder is the Palestinian Studies Postdoctoral Research Associate at Brown University. He received his PhD in History and Middle Eastern and Islamic Studies from New York University and is the editor of Between Jaffa and Mount Hebron: The Diaries of Muhammad 'Abd al-Hadi al-Shrouf (1943–1962) (Institute for Palestine Studies, 2006, in Arabic) and associate editor of Jerusalem Quarterly. His research examines life writing in twentieth-century Palestine and policing and crime in British Mandate Palestine, with an emphasis on strategies and practices of colonial policing, the interplay between formal and informal justice, and interactions between Arab policemen and Palestinian Arab communities.