Panel | Gaza: The Longest Siege in Modern History - 2007 to the Present Livestream 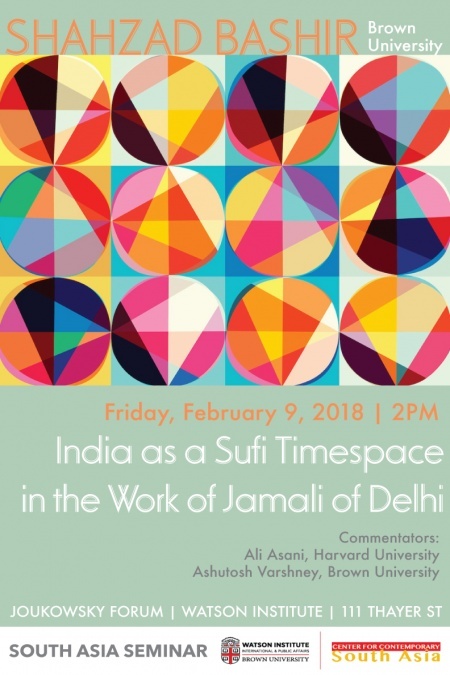 Incoming Middle East Studies Director Shahzad Bashir presents this Center for Contemporary South Asia lecture on Hamid b. Fazlallah Jamali (d. 1535), among the earliest authors in Persian to describe India as a place inscribed by the lives of Sufis. Jamali’s work contains a vision of India as a Sufi timespace at a crucial juncture in the development of distinctly Indian Sufi-Muslim identities. Professor Bashir presents the details of Jamali's work and compares it to that of his contemporaries such as Babur, the first ruler of the Mughal dynasty. Ultimately, the spatiotemporal projections embedded in Jamali’s work help to understand Sufis’ complex place in cultural history, a matter that remains subject to live debate in contemporary South Asia.

Bashir is currently working on two major projects. The first is a book entitled Islamic Pasts and Futures: Conceptual Explorations. This is a wide-ranging treatment that critiques the way Islamic history has been conceptualized in modern scholarship and suggests alternatives, with emphasis on the multiplicity of temporal configurations found in Islamic materials. The second project is tentatively entitled Building the Past: Memory, Metaphor, and Reality in Persianate Islamic Societies. This is a cultural history of an Islamic cosmopolitan arena based on assessing materials produced circa 1400-1600 CE that claim to represent the past. Both these projects engage contemporary academic debates regarding religion, language, historiography, and history on the basis of materials of Islamic provenance. Bashir's work has been supported by fellowships from the National Endowment for the Humanities, the American Council of Learned Societies, the American Research Institute in Turkey, the Stanford Humanities Center, and the John Simon Guggenheim Memorial Foundation. Most recently, he was named an inaugural Andrew F. Carnegie Fellow for the academic year 2015-16.