Ayşe Parla – Precarious Hope: Migration and the Limits of Belonging in Turkey 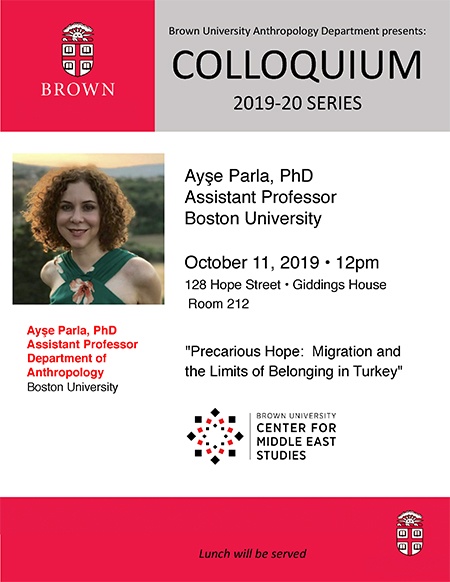 Precarious Hope: Migration and the Limits of Belonging in Turkey (forthcoming in August 2019, Stanford University Press) is an ethnographic study of the historical and legal production of hope among ethnically Turkish labor migrants from Bulgaria. Shifting the focus away from those most vulnerable migrants and refugees who hope against the odds, Precarious Hope trains its lens on a group of migrants who have historically been considered desirable for Turkey’s citizenship regime. Exploring the significance of relative privilege in structuring hope, the book considers the terms and limits of belonging in Turkey through the perspective of migrants for whom legal and cultural membership is systematically promised but who nonetheless remain precarious in the labor market.

What happens to hope as a category of analysis and experience when we consider hope in relation to structural privilege and precarity? Based on five years of ethnographic fieldwork among ethnic Turks who migrate from Bulgaria to Turkey and who are trying to legalize their status, the author explores the tensions between ethnic privilege and economic vulnerability. Turkish immigration policies have worked in lockstep with national aspirations for ethnic and religious conformity, offering this group of migrants in Turkey an advantage over others. She thus considers the limits of belonging in Turkey from the perspective of labor migrants for whom citizenship is intimated and promised—but not guaranteed. As much as hope enables dignity and perseverance for these migrants, it is also used by the Turkish state to reproduce a migration regime that categorizes some as “kin” and desirable and others as “foreign” and dispensable. The experiences of the Bulgaristanlı migrants also speaks to our global predicament in which increasing numbers of people are forced to manage both cultivation of hope and relentless anxiety within structures of inequality.

Ayşe Parla received her Ph.D. in anthropology from New York University, and is an assistant professor of anthropology at Boston University. Parla’s work on transnational migration, precarious labor, differentiated citizenship, and the governance of ethnic and religious diversity is situated at the intersections of the politico-legal and the affective-moral realms in Turkey, its borderlands and diasporas. Her first book, Precarious Hope: Migration and the Limits of Belonging in Turkey (Stanford University Press, 2019) is an ethnographic study of the historical and legal production of hope among ethnically Turkish labor migrants from Bulgaria. Exploring the tension between ethnic privilege and economic vulnerability, the book reconsiders the terms of belonging in Turkey’s contemporary migration and citizenship regime. Her work has also appeared in such journals as Alternatives, American Ethnologist, Citizenship Studies, Differences, International Migration, Public Culture and edited volumes, including, most recently, her chapter on “Critique without a Politics of Hope,” in A Time for Critique, edited by Didier Fassin and Bernard Harcourt (Columbia University Press, 2019).  Parla’s current book project, tentatively entitled “Cemeteries, Necropower and Present Absences” is on the postgenocide legal dispossession of Armenians in Turkey and the cultural normalization of dispossession. Tracking necropolitical policies of destruction and the confiscation of Armenian cemeteries as well as the care and preservation by the community of other remaining cemeteries, the project pursues the entanglements of silence, absence and survival. Before joining the Department of Anthropology at BU in 2018, Parla taught at Sabancı University in Istanbul, and was a fellow, between 2016-2018, at the Institute for Advanced Study, Princeton.