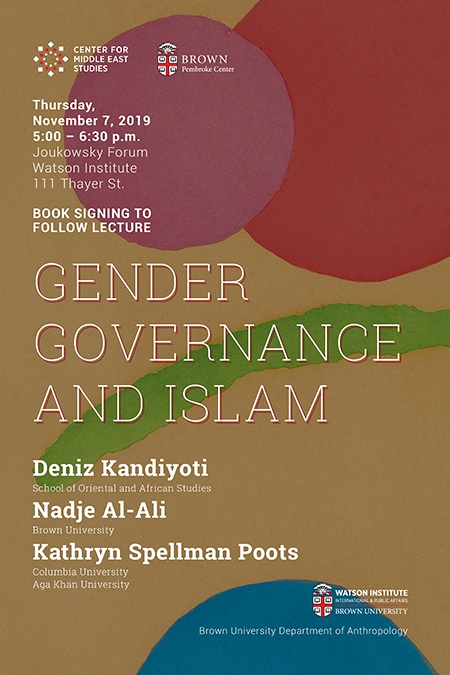 Following a period of rapid political change, both globally and in relation to the Middle East and South Asia, this collection sets new terms of reference for an analysis of the intersections between global, state, non-state and popular actors and their contradictory effects on the politics of gender.

The volume charts the shifts in academic discourse and global development practice that shape our understanding of gender both as an object of policy and as a terrain for activism. Nine individual case studies systematically explore how struggles for political control and legitimacy determine both the ways in which dominant gender orders are safeguarded and the diverse forms of resistance against them.

Cosponsors:
Department of Anthropology
Pembroke Center for Teaching and Research on Women

Deniz Kandiyoti is Emeritus Professor of Development Studies at the School of Oriental and African Studies, University of London. She holds degrees from the University of Paris (Sorbonne) and the London School of Economics and Political Science. She has worked on Turkey, post-Soviet Central Asia and Afghanistan and developed comparative perspectives on state, gender and power in the broader Muslim world. She made key theoretical contributions to analyses of patriarchy and male dominance. She is the author of Concubines, Sisters and Citizens: Identities and Social Transformation (in Turkish, 1997) the editor of Fragments of Culture: The Everyday of Modern Turkey (2002), Gendering the Middle East (1996), Women, Islam and the State (1991) and numerous articles on gender, women’s rights, Islam, development and state policies. She has also acted as consultant for UNDP, UNESCO, OSCE, UNIFEM, British Council, DFID and UNRI.

Kathryn Spellman Poots is a visiting associate professor at Columbia University and associate professor at Aga Khan University's Institute for the Study of Muslim Civilizations in London. Her work, mainly ethnographic and based in the UK, has centered on the Iranian diaspora, Shia transnational networks, cultural hybridity, gender relations and the dynamics of inclusion and exclusion. In 2019 Kathryn was awarded an Advanced Research Collaborative Fellowship at CUNY’s Graduate Center to develop her work on shifting communal boundaries in relation to specific political, social and material logics within Muslim diasporic communities. Her contribution to the co-edited volume Gender, Governance and Islam (2019) looks specifically at creative ways that diasporic women challenge dominant gender ideologies in the era of blatant Islamophobia and rising male centered authoritarianism. This has led to a new project on political ‘othering’ in the Trump era and the extent to which nativist discourses and fear mongering feed into and affect relations within and between discursively constructed minority communities. Kathryn serves as academic program director of the Islamic Studies MA program and played a central role in developing a Dual Degree with Aga Khan University in Islamic Studies and Muslim Cultures starting Fall 2020.