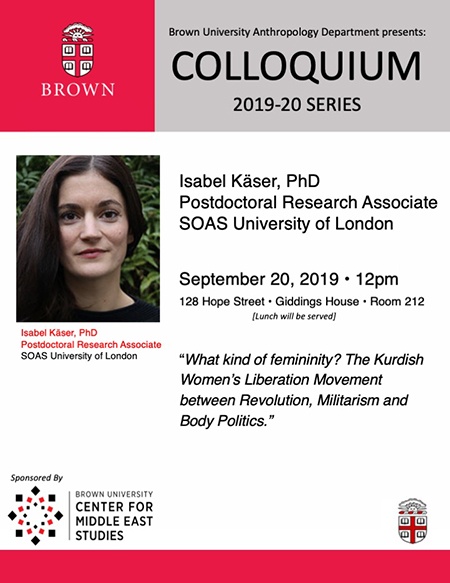 Women have been at the forefront of many of the political and military struggles in the Kurdish Middle East, most visibly so since the start of the ‘Rojava Revolution’ in 2012. But women have in fact since the foundation of the PKK in 1978 played a key role in the ideological and political development of the Liberation Movement as a whole; as guerrillas, activists, politicians, mothers and prisoners. Based on her ethnographic work with the Kurdish Women's Liberation Movement in different parts of Kurdistan, Isabel Käser will discuss how the women's autonomous organizational structures have taken shape and how the process of becoming a freedom fighter unfolds in party education. By asking what kind of femininity has developed over the past 40 years of struggle, Käser's talk analyses the emancipatory power the PKK holds but also zooms into some of the tensions that arise from the interplay between militarism, the party’s body politics and the movement’s revolutionary quest for a more democratic Middle East.

Isabel Käser holds a PhD from the Centre for Gender Studies at SOAS (UK). She is currently a guest lecturer at the University of Bern (Switzerland), a postdoctoral research associate at SOAS, and leads the project 'art in peace mediation' for the Swiss Department of Foreign Affairs. Her research is on:

Kurdish Studies have historically been side-lined within Middle East Studies or reduced to the study of Kurdish nationalism. While there has been a proliferation of Kurdish studies across the US and Europe in recent years, there has been only limited engagement with Kurdish society in its complexity. The aim of this initiative is to support and contribute to critical and original Kurdish Studies that combine theoretically cutting edge and empirically grounded work as well as highlight creative approaches (films, art, literature) to the study of Kurds and Kurdish societies.