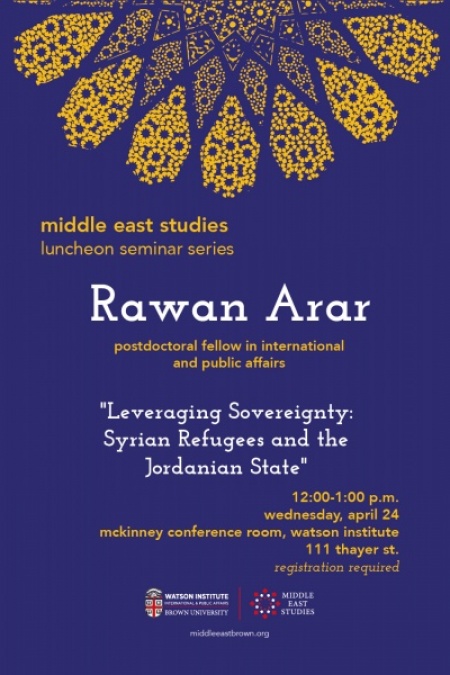 Registration is at capacity, unclaimed seats will be released at the start of the event to those on stand-by

How do developing countries in the Global South – those that host 85% of the world’s 24.5 million refugees – maintain their sovereignty? Rawan Arar examines the case of Jordan, a state that hosts 2.7 million refugees in a total population of 9.5 million people. Jordan protects sovereignty in the face of porous borders and the interference of international institutions and foreign states, providing shelter, education, health care, and protection to millions of refugees—challenges that are exacerbated as citizens face high unemployment and strained social institutions including overcrowded hospitals and underperforming schools.

In this talk, Arar shows that sovereignty is a relational process enacted through quotidian practices not only from the top-down—by government and international officials—but also from the bottom-up through the daily decisions of refugees and citizens. Her research, conducted as an ethnography of the state, utilizes in-depth, semi-structured interviews in Arabic and English, triangulating interviews with Syrian refugees, Jordanian citizens, and UN, NGO, and government officials.

Rawan Arar is a postdoctoral fellow at the Watson Institute for International and Public Affairs. She received her PhD in sociology from the University of California San Diego, MA in women’s and gender studies from the University of Texas, Austin, and BA in sociology from the University of Texas, San Antonio. After completing her fellowship at the Watson Institute, Rawan will begin her appointment as an assistant professor at the University of Washington in the Law, Societies, and Justice department. Her scholarship has been published in Annual Review of Sociology, Journal of Middle East Law and Governance, Nations and Nationalism, and Journal of Ethnic and Migration Studies. Rawan has also written for other academic, policy-oriented, and generalist outlets including the Middle East Institute, the Scholars Strategy Network, and the Washington Post’s Monkey Cage Blog.