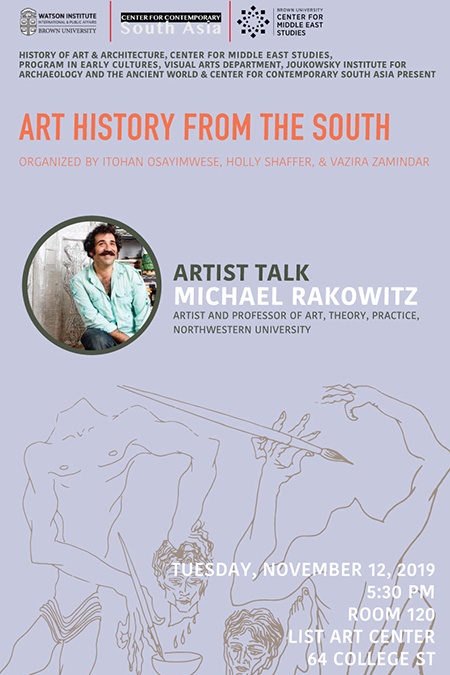 The Department of the History of Art and Architecture and the Center for Contemporary South Asia present an artist talk by Michael Rakowitz who will discuss his recent food-related projects, and his new cookbook, A House with a Date Palm Will Never Starve: Cooking with Date Syrup: Forty-One Chefs and an Artist Create New and Classic Dishes with a Traditional Middle Eastern Ingredient. A book signing and reception featuring Syrian snacks follow the talk.

Michael Rakowitz , known for his complex and politically charged sculptures and installations, describes his art as located at the intersection of hospitality and hostility. He will discuss how his food-related art projects invite people to think about the United States and its relationship with the Middle East in a way that touches their conscience as well as their palates. He will also be available to sign his new cookbook A House with a Date Palm Will Never Starve: Cooking with Date Syrup: Forty-One Chefs and an Artist Create New and Classic Dishes with a Traditional Middle Eastern Ingredient.  A reception will include snacks from Aleppo Sweets, a Providence-based restaurant owned by Youseff Akhtarini and his family, recent refugees from Syria.

Rakowitz's award-winning artwork has often involved food - particularly food inspired by the cooking of his mother, an Iraqi-Jewish immigrant. In his 2003 project, Enemy Kitchen, Rakowitz opened a food truck in Chicago that serves Iraqi food co-prepared by Iraqi chefs and U.S. veterans of the Iraq War. Spoils, a 2011 culinary intervention, involved Rakowitz serving dinner at an upscale Park Avenue restaurant on dinnerware that had been looted from Suddam Hussein’s palaces.

Michael Rakowitz (b. 1973, New York) is the 2020 recipient of the Nasher Prize from the Nasher Sculpture Center in Dallas. His food-related art projects include Enemy Kitchen (2003-ongoing) a food truck serving Iraqi food to Chicago’s hungry public, staffed by veterans of the Iraq War working under Iraqi refugee chefs and Spoils, a culinary intervention at New York City’s Park Avenue restaurant that invited diners to eat off of plates looted from Saddam Hussein’s palaces.