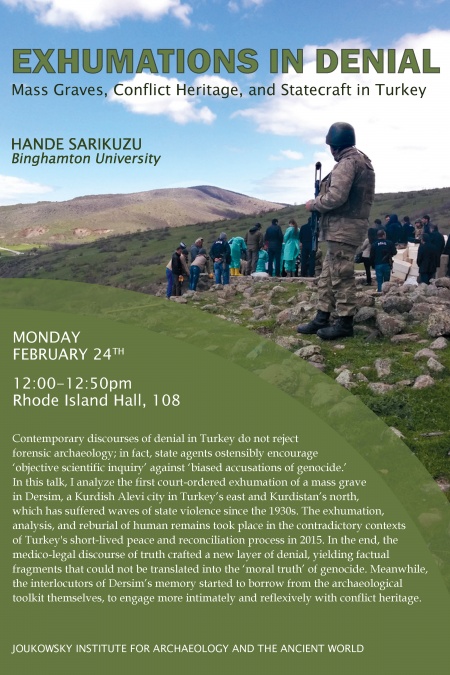 Contemporary discourses of denial in Turkey do not reject forensic archaeology; in fact, state agents ostensibly encourage ‘objective scientific inquiry’ against ‘biased accusations of genocide.’ In this talk, I analyze the first court-ordered exhumation of a mass grave in Dersim, a Kurdish Alevi city in Turkey’s east and Kurdistan’s north, which has suffered waves of state violence since the 1930s. The exhumation, analysis, and reburial of human remains took place in the contradictory contexts of Turkey’s short-lived peace and reconciliation process in 2015. In the end, the medico-legal discourse of truth crafted a new layer of denial, yielding factual fragments that could not be translated into the ‘moral truth’ of genocide. Meanwhile, the interlocutors of Dersim’s memory started to borrow from the archaeological toolkit themselves, to engage more intimately and reflexively with conflict heritage.

Hande Sarikuzu is a Ph.D. Candidate in the Department of Anthropology at Binghamton University.