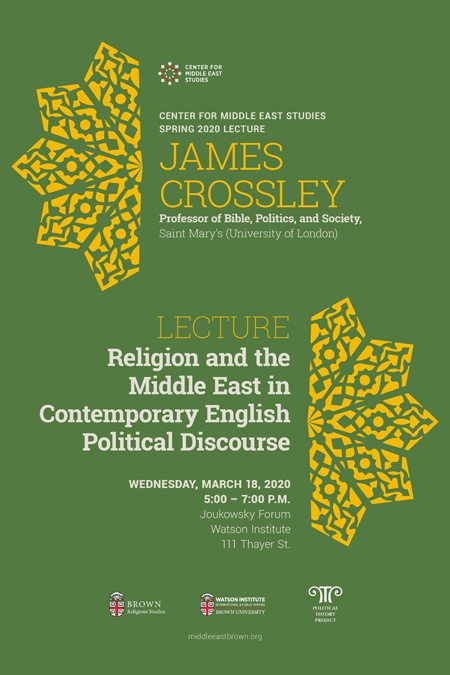 This talk will discuss how religion, particularly Islam and Christianity, have been understood in relation to what is understood as the Middle East and foreign policy in mainstream English political discourse over the past 20 years. This will include the influences on how such language has been understood by Prime Ministers involved in military intervention, such as Tony Blair and David Cameron, and those typically sympathetic to such interventions, like Theresa May and Boris Johnson—and how the debate and assumptions about religion and the Middle East have shifted over the past decade, particularly with anti-war sentiments coming to the fore in parliamentary discourse through Jeremy Corbyn.

James Crossley is professor of Bible, culture and politics at St. Mary’s University, London, and Academic Director of the Centre for the Critical Study of Apocalyptic and Millenarian Movements (CenSAMM) for the Panacea Charitable Trust. He is the author of a number of books and articles on both religion in English politics and Christian origins. His most recent book is Cults, Martyrs and Good Samaritans: Religion in Contemporary English Political Discourse (Pluto Press, 2018).