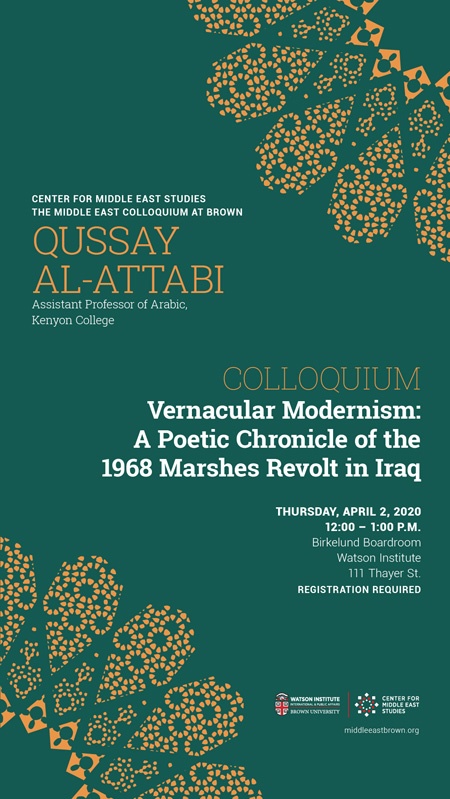 In light of COVID-19 related event guidelines, we are cancelling this event. Please visit the University’s COVID-19 Updates website for up-to-date information, including campus travel restrictions.

After serving five years of his life sentence due to activism in the Iraqi Communist Party, the renowned Iraqi poet Muzaffar al-Nawwab escaped the notorious Hilla prison in a daring prison break in 1968. He took refuge in the southern marshes of Iraq, where he joined a communist faction that sought to overthrow the government. A combination of ideological, economic, and tribal factors contributed to the growth of the revolt, which was eventually overpowered and brutally suppressed. To document Hawr al-Ghmuga’s revolt and mourn its defeat, al-Nawwab wrote “Hajjam al-Burayyis,” a 30-page dramatic poem that chronicled the revolutionary fervor around the wounding and subsequent death of an allegorical tribal chief, Hajjam al-Burayyis.

Al-Attabi explores al-Nawwab’s playful deployment of the Iraqi ʿammiyya vernacular to document his experience of the revolt. The presentation emphasizes the historicity of the literary text by situating it in its ideological context and, concurrently, highlights the work’s textuality by studying the interaction between the poem’s formal techniques and its revolutionary content. In other words, he considers the poem as both (and intrinsically inseparable) artistic creation and historical document at a critical juncture in Iraq’s modern history (within the global revolutionary moment of 1968). Such a historically – and critically – informed reading of the poem, Al-Attabi stresses, allows for a more meaningful reading of al-Nawwab’s innovative use of ʿammiyya poetry in historicizing the marshes revolt.

Qussay Al-Attabi is assistant professor of Arabic at Kenyon College. He is a scholar of modern Arabic literature whose research spans the nineteenth and twentieth centuries in the Arab Middle East, focusing on the intersection of politics and literary and cultural production.